In the early days of the British Woolworth company the Board Directors got to know all their staff personally. But as the chain grew this became impossible. With over five hundred stores a better method was needed to share news with employees and to engender a team spirit. This inspired the publication of a bi-monthly staff magazine.

Rather than opt for a propaganda style journal, Executives encouraged staff to become correspondents and to write the majority of content themselves. The retailer's long-serving printer, Duttons of Liverpool, provided expertise, and the Company input when requested - for example profiles of some of the people working at headquarters, but the style and format was created by and for the staff themselves.

Today The New Bond gives a unique insight into the changing culture of working people over five decades in the mid twentieth century. We are blessed that a long-serving Manager, Reg Gallanders, featured later in this page, kept every copy of the magazine. His collection has been invaluable in creating the Woolworths Museum, and has allowed the content to be preserved and shared. 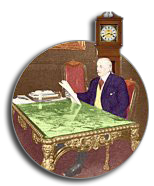 Frank Woolworth was a great communicator. He wrote to his stores every day, with an ecletic mix of instructions, sales tips and news from his travels. When on buying trips he evangelized the new products he had chosen, but also shared details of the local scenery, costumes and even the food he had eaten.. The tradition was maintained by his successors. For example Hubert Parson waxed lyrical about a new flagship store in Oxford Street, London, W1, which he had been privileged to open in 1924.

Until the mid 1930s, most mail was generated by District Offices. They produced reams of close-typed instructions on a myriad of subjects. Few memos were seen by salesfloor staff, who were briefed by their line managers. They were never asked for feedback on their orders!

Then in June 1933 the Metropolitan District Office had a brainwave. It created a magazine which sought input from the staff as well as conveying news from the office. District Office staff typed the journal in their lunch breaks. They gambled correctly that store staff would fund the cost of production at threepence (1¼p). 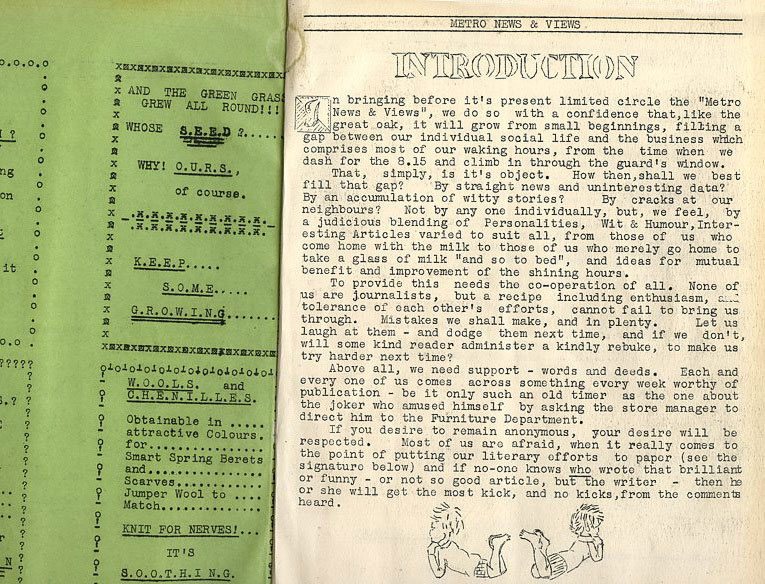 The initial run was limited to a hundred copies, which was the maximum number that could be printed from a single master on the office's Gestetner machine. These sold out quickly. A local printer was hired to produce the second edition and the print-run was increased to five hundred. Those also sold out.

The authors invited input from store staff, giving examples of the kinds of things they were looking for. They were inundated with replies. The contributions included histories of some of the firm's products, recipes, knitting patterns, poems and anecdotes. Many also took the opportunity to share their thoughts about company policy. Few took the option to contribute anonymously or under a pseudonym, happy for their names to be published. The top brass took criticism on the chin and were happy to join the debate. This followed a tradition started by Frank Woolworth and showcases the "classless" culture that he encouraged. 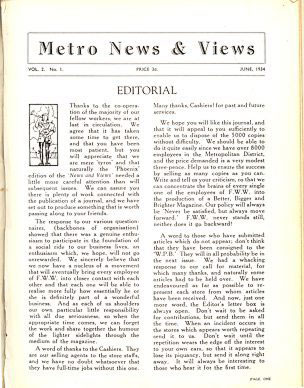 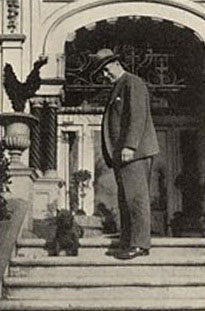 Within a year the run quadrupled to 2,000 copies, reaching 5,000 staff. This was enough to finance professional typesetting by the Company Printers, Duttons of Liverpool, allowing photos and cartoons for the first time.

Fittingly the first image was of "the boss", District Manager F.D. Sprague at home. His resumé revealed he had trained at S. H. Knox & Co. in 1905. He had taken control of his first store after just thirty months and had risen steadily to become a Superintendent in Kansas City before becoming a District Manager in the UK in 1925. On appointment he had re-baptised the Southern District Metropolitan, or Metro for short.

Sprague and his Northern counterpart had seats on the Board. Sprague was able to share news of the popularity of his venture into publishing. The Chairman, William Stephenson, was taken with the idea. All were agreed that it would be good to have a way of communicating directly with the shopfloor staff across the 620 stores. The Board adopted the idea, and set the wheels in motion for the first new Company magazine to be published in good time for Christmas 1935.

The new house journal adopted the name The New Bond, after the HQ in New Bond Street in fashionable Mayfair, London W1. It was styled on Metro News and Views, with Duttons of Liverpool financing colour covers for the longer run. The inaugural edition was given away as a Christmas present to every employee. 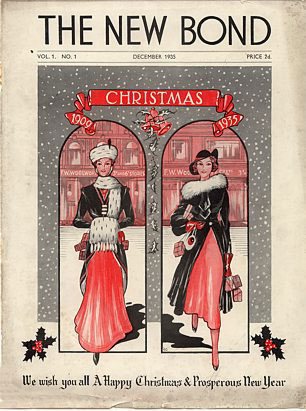 Volume 1, Edition 1 began with a synopsis of 'the story so far' in "The Long Long Chain: the story of wonderful achievement", a ghost story, and a profile of an Assistant from Beverley, Yorkshire deemed the "company's champion lass". The legendary cartoonist H.M. Bateman contributed a spectacular centrepiece. It shows a scene of devastation as staff reel from the visit of "the customer who spent £10 in a Woolworth store". Ten pounds would have been enough to buy their four hundred most expensive items.

Staff loved the magazine from day one. Competition to become each store's 'New Bond Correspondent' was intense. Regular elections ensured that these "NBCs" took their duties very seriously!

The magazines reveal the working conditions and pre-occupations of staff, set against the outside events of the day. Their content was driven by the staff for the staff. Their pages offer a window on Air Raid Precautions, Gas Masks and a World War. They reveal the changing aspirations of workers and their families before and after World War II. 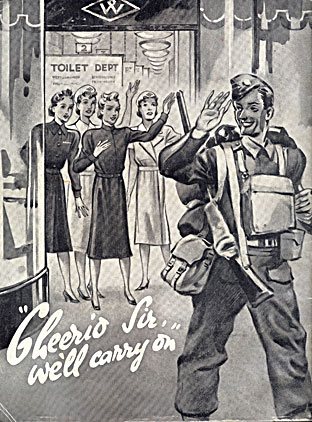 Publication continued through World War II, thanks to the intervention of the Chairman, William Stephenson. He had been invited to head Aircraft Production for the Air Ministry. He persuaded his new boss, the Canadian press baron, Lord Beaverbrook to intervene. On the proviso that the magazine would target employees serving in H.M. Forces, Beaverbrook arranged for both paper and permission to print. As a result we have a photo of each and every conscripted employee in uniform, with details of their rank and unit. Almost half of those pictured are women.

The magazines also give a largely uncensored snapshot of life on the Home Front, including product shortages, the staff's voluntary work as ARP Wardens, Special Constables, Auxiliary Nurses and in the Women's Voluntary Service. From 1941 they include details of the fallen and those reported missing, and by 1942 there are evocative letters and hand-drawn cards from prisoners-of-war who had received copies of The New Bond in their red cross parcels.

The magazines also report on fund-raising initiatives that saw colleagues and Directors buy Spitfires for the RAF, build Homes for Orphans and work in local communities. The 1944-1946 issues document the road to victory, demobilisation and the rebuilding once the survivors returned to work. 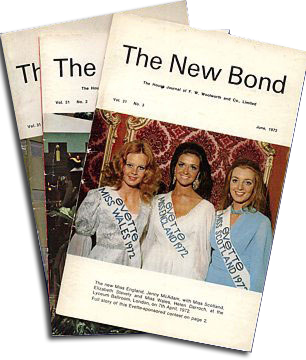 After the War the journal converted to a compact layout, with a sprinkling of colour. The increased production cost was funded by a small amount of supplier product advertising. New features included movie reviews and features on pop music as welll as pen pictures of some of the diverse towns and cities served by the stores.

During the 1960s the parent company in the USA was keen to modernise and swept aside many long-standing traditions in North America. A new generation of Directors took a more active interest in the British subsidiary. Against the tide they recognised the value of The New Bond and introduced their own version in the USA and Canada. Early issues of their 'Woolworth World' had a number of similar features, but were more corporate and in broadsheet newspaper format. Copies were not distributed in Britain.

By the early 1970s pressure mounted for the British firm to follow suit. The decision to switch to a newspaper proved highly contentious, even after it was agreed that it would be given away free of charge. Long servers did not want to lose the New Bond name, even though the headquarters had moved to new premises in Marylebone Road, NW1 in 1959. All feared the onset of propaganda. The final edition of the New Bond, Volume 31, No. 3, which was published in July 1972, explained:

"The entire image of the Company today is changing - Cash/Wrap operation, Super stores, swinging fashions, largest record retailer, breaking new ground with exciting merchandise ... the list is endless. It is fitting that during this time of development the house journal should also develop and adopt the trend in industrial relations of newpapers to inform staff of the activities by their Company."

The replacement journal, "Woolworth News" (tweaked to "Woolworths News" and then "Woolies News") survived for a further 33 years in paper media, before moving to an intranet-based digital news feature called "The Quickie" which was published fortnightly until the business went into Administration in November 2008. 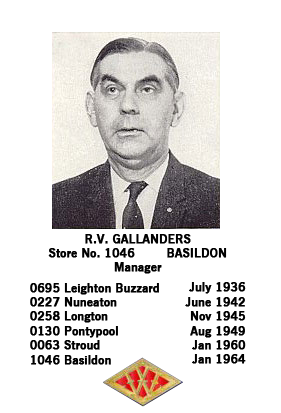 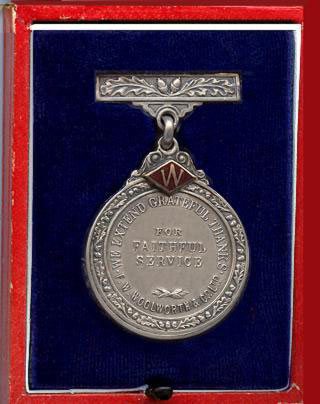 The Woolworths Museum is deeply indebted to
Mr Reg Gallanders
who gave the Company 40 years of exemplary service, and to his his son Ray.

We used the papers that Reg collected during his career extensively to prepare this website.

Mr. Gallanders kept every copy of the New Bond.