A song of sixpence

F.W. Woolworth first sold sheet music in the 1890s in the USA for 5¢ per song. At the time sheets to play or sing from were the only medium available.

Then, in 1914 while recording technology was in its infancy and as Columbia Records were selling 78 rpm for $1.50, the Buyer in New York entered negotiations with a former Columbia executive, Henry Waterson, to launch a new line of much smaller records of a single song, selling for just 10¢ each. The Little Wonder label was a huge hit, with weekly sales in excess of a half a million records.

Fred Woolworth, the UK MD resisted the new-fangled idea, which he considered too American for the British Isles. It was only after his death that a local equivalent label, Little Marvel, was introduced in 1923. It and sister label Mimosa became instant hits with the public. The sixpenny songs became a staple of the store range and became a major area of product development through the 1920s and for much of the 1930s.

On this page we introduce the labels from the 1910s and 1920s, and offer visitors the chance to hear or download some of the songs that our great grandparents bought from Woolies. 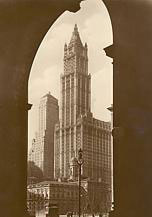 In 1920 Charles F. Valentine, who had become the Woolworth Treasurer (FD) in New York in 1919, visited the UK on a fact-finding mission. He wanted to see some of the stores and meet the subsidiary's celebrated English Director William Stephenson. The trip was a success. At the end it was agreed that Stephenson would reciprocate, travelling to America to meet the parent company Board face-to-face. This also gave him the chance to see the latest stateside innovations at the 5 & 10¢.

There were many similarities across the Atlantic. But Stephenson had been unaware of the phenomenal success that the 5 & 10¢ had enjoyed on its range of gramophone records. It had been selling five inch single-sided 'Little Wonder' discs since 1915. It had partenered with Henry Waterson, a former Columbia Records executive, to offer titles for 10¢ each. Shoppers had loved them. Some city centre stores across the USA and Canada boasted sales of over a thousand records a week. Stephenson sought to repeat the success in the British Isles.

To his surprise Stephenson met with resistance from his boss Fred Woolworth when he proposed a small record counter in the stores. The MD was aware of the offer in the USA but felt that British households were poorer and did not own gramophones. He was prepared to permit a small trial, but no more.

The trial results were good, but the MD was unimpressed. The range was only extended across the full 150 stores after Fred Woolworth passed away suddenly in 1923 and Stephenson was named his successor.

Stephenson took Little Wonder as his model, but added a twist of his own as he developed a music offer in the UK. He hired two companies to produce records for Woolworth's. The Crystallate Recording Company and Vocalion were placed in direct competition with each other. He told both firms that the Threepenny and Sixpenny Stores would choose a single supplier at a later date based on sales performance. He argued that there was plenty of business to go around, particularly if the new partners found good songs. After five years of fierce rivalry selling mechanically-recorded discs, the two suppliers merged at the end of 1928. They had chosen to pool their resources to buy the equipment needed to record electronically. After the merger they rebranded their output 'Victory Records'. The higher sound quality helped them to quadruple their sales at Woolworth's. By the end of the decade weekly sales averaged almost a quarter of a million records.

We've compiled some of the best selling songs of the era into a virtual juke box. You can access this if you have sufficient bandwidth by choosing an item in one of the pull-down menus below.

Please note that the linked pages in the features below include embedded sounds averaging 1 Megabyte per disc, with an option to download and save the song in a file of a further 1Mb. 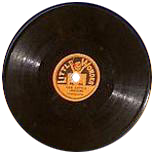 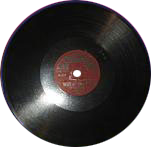 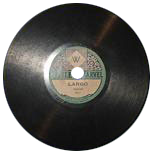 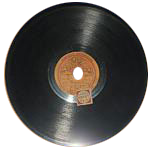