Adapting to a new world

Victory in the world war had come at a heavy price. One hundred and forty-five employees had lost their lives serving in the Armed Forces. Twenty-six stores had been totally destroyed, 302 more had sustained damage but had been temporarily patched up so that they continue trading, and another 50 had been partly or wholly commandeered by the powers-that-be and put to other uses to do with the war effort.

But after Victory in Europe, the first of 2,163 conscripts and volunteers started to return to work, with the trickle growing to a torrent after VJ Day when Japan finally surrendered, bringing the long conflict to an end. The law gave every one of them the right to return to the job that they had left. The Company went one better, offering them the choice of either that job or a better one, demoting those who had not served, including nearly all of the long-suffering women who had stepped up as Managers, to make way for the heroes. The women stepped aside willingly, without fuss, and kept their disappointment to themselves.

For those returning the transition from military to civilian life was not an easy one. Those who had served came back as different people. Most were more confident, more assertive and more determined than ever to build a better world and a better Woolworth's. But some were scarred, traumatised and mere shadows of their former selves. Almost all had one thing in common. They didn't want to talk about it.

Many were frustrated by the snail's pace of recovery, the bureaucracy of central control over even the most minor building repairs, and the increasingly severe rationing as a Government Export Drive sought to pay down the national debt, incurred at the time when Great Britain and its Empire had stood alone.

Although under no legal obligation to do so, Woolworth introduced 'transitional measures', raising morale by boosting the pay packets of its ex-servicemen and adapting their contracts to make it easier to earn a bonus, and very rewarding for those who found and trained a new generation to open the new stores that they planned to open as soon as the good times returned.

Remarkably, such was the sense of belonging at Woolworth's, that virtually everyone who could return to work did so, going on to serve for the rest of their careers. Their loyalty helped take the retailer to a level of success and prosperity still greater than it had enjoyed before the War.

Getting back to normal after World War II 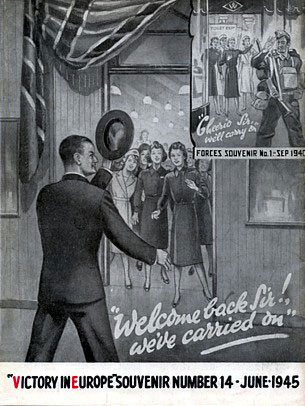 As soon as victory was assured in Europe, before Japan had surrendered, men and women serving in the armed forces started to return for work. The June 1945 edition of The New Bond, asked staff to contact their District Office as soon as they had a demobilisation date.

The law gave conscripts and volunteers the right to return to job they did before the War. Every appointment made while they were aware was made on a temporary basis. The end of hostilities presented a major logistical challenge to determine who was returning and whether they wanted to return to their former store or would be happy to be promoted to a larger one.

In the shake-up that followed some people who had worked their way up to manage the largest city centre stores in wartime had to return to the tiny branches where they had started out in the 1930s. And many women who had proved more than capable of controlling their stores during the conflict were sent back to the office or stockroom. Most was stoical, glad to make way for a 'hero' and to honour the 145 who had fallen in battle and would never come home.

The Board fully recognised the sacrifice that its female staff had made. It became policy in the 1950s to approach those women first when a new store opened. In the culture of the day, sadly family commitments prevented most from accepting an appointment if it would involve moving home. 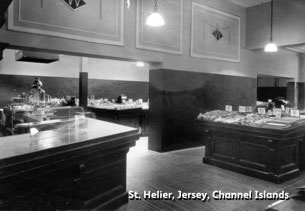 After getting demobilized staff back to work, the next priority was to restore the stores in the Channel Islands. This aligned with a national wave of sympathy for the islanders. The people of Jersey and Guernsey had suffered terribly under German occupation. 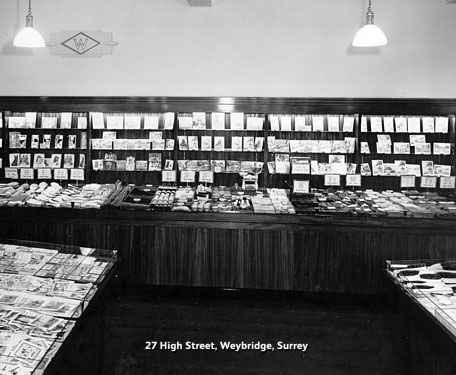 Reinstatement of the mainland stores had to wait. Building materials were restricted as hospitals, schools and houses for the homeless were given priority by the Government.

Other regulations restricted what could be sold in-store, and the quantities that customers were allowed to buy. The rations of Food and Clothing were reduced, and stayed in place into the Fifties.

The Country's first priority was to repay the huge debt incurred to fight the war. At the start of hostilities, when the USA had remained neutral, they had supplied munitions on credit. A major export drive was launched to earn foreign exchange which would help to balance the books. Most manufactured goods were sent abroad rather than to the shops.

There were two store openings in 1946. Each building had been mothballed after the outbreak of war. As soon as fixtures became available they were fitted out and opened. Their new layouts gave a flavour of things to come. The building fabric of the store at Weybridge, Surrey (No. 760) had been completed in 1939, but, rather than fit out the salesfloor with counters, it had been equipped with desks and phones to make a temporary headquarters in case it was needed. The contingency plan addressed the risk that the New Bond Street Office in the West End of London was in area which was likely to be targeted in German air raids. This proved a wise move when the Burlington Arcade next door to the office was hit, leaving the office inaccessible for weeks. Work carried on as usual in Weybridge.

A new store in Newry, County Down, Northern Ireland (No. 769) had also been mothballed after government intervention. It was one of many branches that was requisitioned for a government department, and had been used by the Ministry of Food. The orders seizing control of these properties stated that they were required for storage and would not be opened to the public. The other branches were stripped of merchandise and handed over, while the Newry branch had been taken before it had been fitted out.

With peace restored the Construction Team tracked down new-style mahogany fixtures, creating a more modern look as a prototype for the future. With no upper price limit they were able to offer a much wider range. Some of the new items had prices as high as five shillings, ten times the pre-war limit. This was expressed as "5/-" on price tickets and was the equivalent of 25p at the time, or, adjusted for inflation in the intervening years. £7.50 in the 21st Century. Both new stores proved very popular with the public. 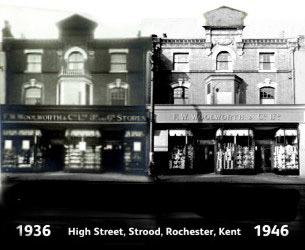 Another challenge was to remove references to the old maximum price. Customers complained they could no longer find anything  that cost threepence or sixpence, after the inflation of the war years. In fact a third of the range was actually 6d or less, but all agreed the signs were no longer appropriate.

With building materials rationed, the only option was to remove the surplus letters, give the fascia board a lick of red paint and then reposition the "F. W. Woolworth & Co. Ltd." to the centre. The remaining letters, spelling '3D and 6D Stores', and in some cases 'Nothing over 6D' were returned to District Office. Most were dismantled and recycled. 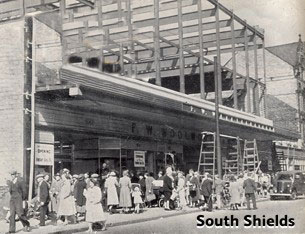 In 1948 the first High Street reconstruction began. The towns that had sustained the most damage were given priority. The Woolworth Architect was invited to make suggestions about the styling and materials to be adopted. It was agreed that a War Reparations Scheme would meet most of the rebuilding cost.

Twenty-six stores had been completely destroyed. The devastation stretched along the South Coast from Plymouth and Devonport in the west, along the English Channel through Bristol, Bournemouth, Southampton, Portsmouth, Southsea, Chatham and Dover to Lowestoft, Norwich and Hull on the East Coast. The enemy had also targeted major centres of industry. Such losses had been more random. Some stores survived intact, while others, like Coventry, Sheffield and South Shields had been obliterated.

Harold Winbourne, the Chief Architect, prepared a store 'look' which he adapted to suit each location. His new buildings were more accessible, with wider step-free entrances, and were significantly larger and brighter.

By using new construction techniques, stores could be built quickly and cheaply, and could be opened in stages. The designs went on to stand the test of time. Most of the new buildings gave a further sixty years' service with little structural change, surviving and still stylish when the shutters fell on the chain in 2008.

By the end of the decade there was a marked difference between the stores that had survived the war and those that were newly built. Compare the old store above, which is illuminated by incandescent bulbs in globe shades and has an oiled wooden floor and lots of pillars, with the open plan layout of the new Norwich store, with a high ceiling, flourescent lighting and a shiny terrazzo marble floor. The new stores significantly outperformed the old, which inspired a major upgrade programme during the Fifties and drove rapid sales growth. There are many more pictures of the new-look in the interactive exhibit in the 1950s Gallery of the Woolworths Museum.