Top of the Shop

By 1919 F.W. Woolworth Co. operated over 1,000 stores in North America, and almost 100 in the British Isles. Its success had been built on the inspiration and charisma of one man, whose name appeared above the door of each of those branches. Then, suddenly and unexpectedly, he was gone.

Who would replace him? Would the Vice-Presidents, who had previously operated Dimestores of their own, descend into in-fighting, or would Frank's taciturn younger brother Sum step in to steady the ship? As the Board of Directors met to consider the Corporation's future, no-one knew. Certainly no-one expected the outcome that followed, least of all the man destined to become 'top of the shop'. 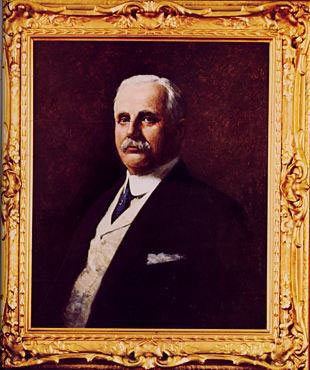 Frank Woolworth had led from the front. He had been a charismatic, hands-on leader for forty years. While others might have retired, he had been reinvigorated by President Woodrow Wilson's request to join the USA's War Cabinet and had tackled the challenge enthusiastically. But he had still found time for the 5 & 10¢. His thousandth store was like no other, in America's prime shopping street, Fifth Avenue, New York. It had opened to acclaim in 1917. After the Armistice he had turned his attention to the upcoming Fortieth Anniversary of Woolworth's, with plans for a big publicity drive and an even bigger sale. But in quieter moments he was tired and lost without the support of his beloved wife Jennie.

His soul-mate had been his nurse, mentor and friend. Not only had she nurtured their three daughters, she had also kept Frank at peace with himself. But over the previous decade she had became increasingly distant. Doctors had described her condition as "the living death". Frank had tried everything. His posse of medics could not arrest the decline, only make Jennie comfortable, in a world of her own. Then, as now, early-onset senile dementure had no cure. Frank was lost without Jennie, and became increasingly morose and introspective.

So it was that just a few days short of his sixty-eighth birthday he passed away on Tuesday 8 April 1919. He had worked a full day on the previous Friday, but had complained of a cold as he left for his weekend retreat. He had also been suffering with toothache and (after the loss of his mentor William Moore) had been unwilling to go to the dentist.

He left an impressive legacy: 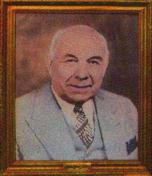 The most moving tribute came from a surprising quarter. His arch rival Sebastian S. Kresge had been a thorn in the side. Wherever Woolworth opened a store, a Kresge's popped up next door. Despite assuring people that the best shop to have next door was another 5 & 10¢, to highlight Woolworth's 'superior values', Kresge's just kept coming.

Frank would have been humbled to know that every S.S. Kresge had closed for his funeral, calling this "a mark of respect for the nestor of the 5 & 10¢ business". Some things money cannot buy.

Surprisingly Frank Woolworth had neglected to consider succession to his role as President, perhaps assuming that his brother would step up. But Charles Sumner Woolworth, had no such intent. The surviving pioneers, Fred M. Kirby and Earle P. Charlton had each built substantial external commercial interests, alongside their Vice-President duties. Neither wanted a full-time role. Instead the Board had to find a younger man, who could act as an honest broker and take the 5 & 10¢ forward to continuing prosperity. 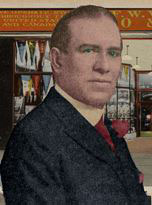 Hubert Parson had been hired as a clerk by Frank Woolworth in Spring 1892. The Magnate had been impressed by the tone of a newpaper ad. that Parson had placed offering his services. Hubert had built a reputation as a canny accountant with an eye for detail and a photographic memory. He had proved to be the one person who could make the boss see sense. Frank had explained this with an anecdote. One day the Treasurer had berated his boss: "You control every expense in the stores, challenging those managers who do not put enough stamps on their letters ... yet you carry unbanked checks around in your pockets for weeks at a time." Parson continued "Isn't it true, that if I dropped a nickel out of your office window .. [in] .. the world's tallest skyscraper, you would run down ... to pick it up? Well, that is how much interest you lose every minute those checks are not in the bank!"

In 1905 Parson had been elected F.W. Woolworth & Co's first Treasurer [FD] when the firm was incorporated, and had subsequently become Director/Secretary after the listing in 1912. He had helped each Founder to invest his fortune and had stepped up to be General Manager and VP after the death of Carson Peck in 1916.

Despite his vanity, when he went into the AGM on June 13, 1919, at which the Presidency was to be resolved, not even Parson considered that he might succeed his mentor. He had never worked in a store and had trained as an accountant, not a retailer. But the Board needed a peacemaker. Getting a canny financier was a bonus. He was elected unanimously. That evening, after riding up in the express lift, Parson entered the Empire Room at headquarters and sat for the first time at the desk which had once belonged to Napoleon Bonaparte. From this vantage point, atop the Woolworth Building, the destiny of the world's largest retail chain was in his hands. He penned this message to the stores:

I am a very proud and happy man today as the Board of Directors of this Corporation, at their Annual Meeting yesterday, elected me to the high office of President of F. W. Woolworth Co.

This office carries with it the responsibilities of the general management and oversight of the business, and I count on every man in the business to give me his full support and co-operation so that I can administer this office to the best interest of the business and every man in it. I propose to give the best that is in me to the administration of this great business with which I have been associated for the past twenty-seven years, but no one man can make this business a success.

Prior to January, 1912, this business was operated as separate units by F. W. Woolworth, S. H. Knox, F. M. Kirby, E. P. Charlton and C. S. Woolworth, but each had their own business and had spent years establishing foundations and working principles for their organization, and when these Founders brought their business into the present Corporation, they had reached the point in their last year selling $52,000,000. in the year 1911. During the seven years that this Corporation has been in existence, the sales have increased to $107,000,000, and this has been brought about because the owners of these individual businesses had laid the foundation to success by giving careful thought and personal attention to the right principles of their own businesses. When these organizations were welded into the one great organization that we have today, there was a place for every man and team work was developed which resulted in the tremendous pulling power for business that has achieved the results that are on record.

During the past four years we have lost four of the pillars of the business. First, Mr. C. C. Peck, next Mr. S. H. Knox, next Mr. C. C. Griswold, and this year our beloved President, F. W. Woolworth, but notwithstanding the loss of these great powers in the business, the organization was so perfected that the business went on increasing day by day, so that it has been demonstrated that the business is not dependent on any one man. We are very fortunate indeed to still have with us in active service, Messrs. F. M. Kirby, C. S. Woolworth and E. P. Charlton whose advice and counsel will be a great help to us in guiding this great business to further success.

We have created a new Office known as Chairman of the Board, and Mr. C. S. Woolworth has been appointed to that office, his duties being to preside as Chairman for Board of Directors Meetings and to act in an advisory capacity to the President. With the advice and counsel of Mr. C. S. Woolworth, Mr. Kirby and Mr. Charlton, and with the loyal support and co-operation of each and every man connected with this business, your President enters upon his new duties with the full assurance that we are going to make this business greater in the years to come than any of us ever dreamt of.

Remember that the President's office is open at all times to any Woolworth man and I will be glad to welcome anybody who takes the time and trouble to visit the Woolworth Bldg. and I want you to feel free to confer with this office personally or by letter on all subjects that may be of interest to you or the business