Byron De Witt Miller joined F.W. Woolworth as an errand boy. He became a role model for employees around the world, as his talents were recognised and he climbed from the very bottom to the pinnacle of the organisation.

After a spell as a learner, Miller became first a Store Manager and then Superintendent for the stores in Upstate New York. For most this would be a career in itself. But he was talent-spotted by the Founder and asked to join the pioneers attempting to set up an overseas subsidiary in the UK. He set sail in 1909 and played a key role in helping the British operation to outshine its parent company by the time he was recalled to New York in 1921. Again he was being prepared for greatness, having been identified as the next head of the worldwide corporation.

While acting as Treasurer (Finance Director) he also took responsibility for overseas operations, successfully shaping first a huge warehouse operation in Sonneberg, Germany and then a subsidiary in the Weimar Republic which still trades today. He took the helm of the 5 and 10 in New York in the 1930s and steered the business through the transition from fixed prices to become a modern variety store, helping profits to grow rapidly. He left F.W. Woolworth much stronger than he found it, and ranks as arguably the finest leader of the Company aside from the Woolworth brothers themselves.

Miller was born in Portland, Maine, USA on 30 December, 1875. He had the ultimate Woolworth career. He started as an errand boy, founded two new, successful international subsidiaries, became Finance Director, set up a global sourcing operation and served as President of the world's largest variety store chain. After his official retirement he was invited to remain on the Board as Non-Executive Director and served with great distinction for another twenty five-years. He made a huge contribution to Woolworths in the UK, both in shaping the Company with Frank W. Woolworth and taking it public, before addressing some of the issues facing the parent company in North America. He steered the Corporation through the transition from its Five-and-Ten roots to become a modern variety store chain. 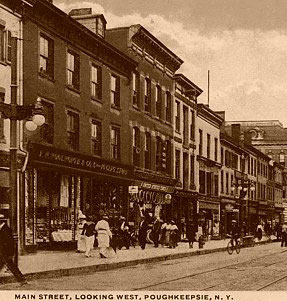 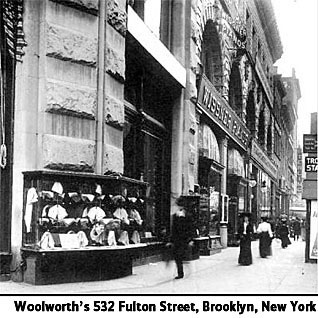 In 1893 Miller applied to become a Woolworth "learner", but there were no vacancies. So he persuaded the Founder's sister-in-law to take him on as an errand boy at the Poughkeepsie, NY branch.

When the Founder heard of the young man's initiative he made him a learner at once, moving him first to Fulton Street, Brooklyn, New York and then to a store of his own.

After a highly successful spell in store management, in 1908 Woolworth made Miller his Superintendent (Area Manager), with responsibility for the stores in upstate New York. These included Syracuse (managed by Charlie Hubbard), Port Jervis (managed by John Snow), 6th Avenue, Manhathhan (managed by Fred Woolworth) and the neighbouring Reshipping Warehouse (managed by Samuel Balfour). Miller was one of the youngest senior executives. He was keen to improve himself and volunteered when Frank called for British pioneers.

On arriving in the UK, Frank Woolworth and his team headed to London. There was much to do. Frank and Jennie Woolworth, Samuel Balfour and Byron Miller went to Companies House to set up the British Company. The papers were signed on 23rd July 1909. Faced with mutterings in the press, Frank hired an Englishman, William Stephenson, to join him.

The next task was to scout for locations. Frank fancied Northampton, because of its central location, but also liked Liverpool which he noted had a higher denisty of population and seemed more prosperous than nearby Manchester. The shortlist for future openings also included Southampton, Portsmouth, Croydon, Brighton, Reading, Hammersmith, Kensington, Birmingham, Wolverhampton, and Coventry. The team split up with Balfour and Stephenson sent North and Miller and Fred Woolworth sent South. 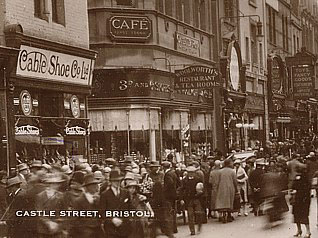 Miller's first openings in 1912 were in Brixton Road, Brixton, an affluent suburb of London about three miles from the centre (which he considered to be the British equivalent of Brooklyn, New York), and in Castle Street, Bristol in Somerset (which he compared to Atlantic City, New Jersey). Another Miller opening in 1912 was Croydon, Surrey, about five miles from Brixton. This long-serving branch features extensively in the 1910s Gallery of the Museum.

Scouting for locations and hammering out the rental terms became a key part of Miller's role. Between 1909 and 1920 he was involved in the siting of more than 80 stores. In parallel he established a Buying Office in London, taking rented premises opposite Selfridges in Oxford Street. It later relocated to Victory House, Kingsway, WC2, which was rented from the Crown. 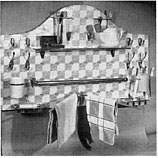 In his role as Buyer, Miller's task was to scour the product lists from the USA and determine which items should be imported from across the Atlantic and which could be duplicated by local suppliers. It took him a while to get used to English tastes and in later life he used to tell tales of the customers' reaction to his ranges of Bathroom and Kitchenware in the Liverpool store. "I say, wot's this blasted thing for? Wotta you do with it?", was the first question he remembered. 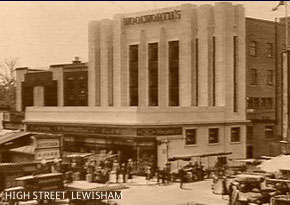 Miller became Company Secretary in November 1910. He held the role for nine years. He asked lots of questions. Drawing on his time as a Superintendent he challenged plans to expand and adapt stores, and he was meticulous in reviewing annual inventory (stock take and profit performance) results with the Managers. He challenged stock losses any expense higher than the previous year? Did the store manager not want a bonus and to get promoted? And what of the Superintendent - was he cut out for life on the road?

The Board benefitted greatly from Miller's management expertise. He contributed much of the rigour needed to expand quickly and profitably. 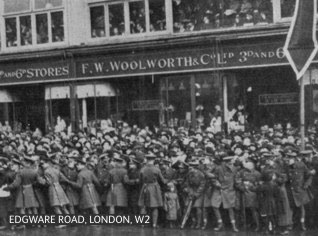 In April 1919 the Board was shaken by news of the death of Frank Woolworth. He had overseen the transition as five rival 5 & 10¢ chains had merged in 1912. He had insisted that executives from Knox, Kirby and Charlton chains pulled together with the Woolworth stores. Replacing him would be hard. Sumner Woolworth, Frank's brother, declined, prefering a pastoral role as Chairman. Instead the Corporation's Treasurer (FD), Senior Vice President Hubert Parson, was chosen as the new President.

The selection left a vacancy for a Finance Director and SVP. The Board decided to recall Miller to New York, with the effect from the first day of the new financial year. To maintain a link to London, it was agreed that as well as the Finance role, Miller would also oversee International Operations.

It is believed the rationale behind Miller's selection centred on succession planning. He was recognised as one of the greatest talents in the business, and like Parson had no factional allegiance. But there was also another compelling reason. The parent company was keen to learn all they could about the runaway success of the British subsidiary, which had continued to grow at pace throughout the Great War. Sales and profits from the United Kingdom far exceeded the targets that New York had set.

Miller proved a capable FD, but excelled in his international work. Under his supervision the firm established Buying Offices in Japan and in Sonneberg, Germany, where they already had a major warehouse. These operations helped the Five-and-Ten to withstand increasing competition from rival dimestore chains. By 1920 Kresge, Kress, Newberry, W.T. Grant and McCrory all competed with F. W. Woolworth. Collectively they had almost as many stores as the giant corporation. Miller's overseas sourcing helped drive down costs, allowing the firm to compete without following their rivals in increasing the upper price maximum of ten cents. 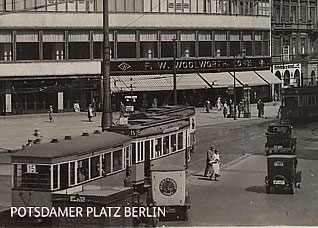 Miller applied what he had learnt to fulfil another of Frank Woolworth's dreams. On2 November 1926 a consolidated subsidiary was established in Germany. The 5 & 10¢ became the 25 and 50 Pfennigs. Miller worked with Richard Strongman, who headed the Sonneberg sourcing operation, to shape the new retail business. Prices were cleverly pitched at higher levels than in the UK or USA, allowing a more upmarket store operation and a broader range of Clothing in Contentinental Europe.

The first branch opened at 26/28 Faulstrasse in the northern coastal port of Bremen on 30 July 1928. It was a hit. By 1933 the chain had established critical mass, just in time. Political changes interrupted communication lines to New York, forcing F.W. Woolworth GMBH to stand alone. Today it is the one original subsidiary still flying the flag for FWW. Unlike the British chain it survived Administration in 2009 and continues to prosper. 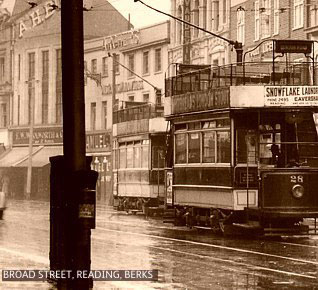 The crowning glory of Miller's Vice-Presidency was a scheme hatched with his friend, the British MD William Stephenson. After the Wall Street Crash the two schemed to float the unconsolidated UK subsidiary from on the London Stock Exchange, by reducing the parent company stake from 65% to 52.7%. When the plan came to fruition the shares were over-subscribed. Share sales financed an exceptional dividend to American stockholders of 66¢ on each 25¢ share. This saved many stateside investors from ruin. They had watched the US stock plummet during the Crash of 1929. Miller and Stephenson were feted as the heroes of the hour.

The move also allowed the British subsidiary to amend its Articles of Association. They had become caught in the crossfire of new American legislation which was intended to put an end to a spate of pyramid schemes, but which prevented the expanding British chain from buying freehold property without first having the Deeds examined by a New York District Court Judge. F. W. Woolworth & Co. Ltd. became a British Company, operating under the laws of England and Wales. 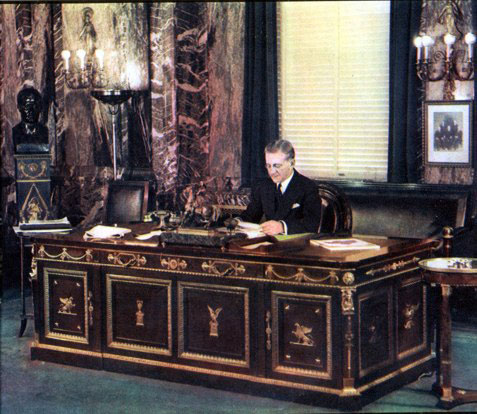 His biggest challenge was to guide the US stores through the transition from fixed pricing to become a modern variety store. First the limit rose to 20¢ before it was dropped altogether in 1935.

The UK and Weimar Republic stores chose to stick with their limits, which worked well.

To the relief of the sceptics, the sky did not fall. Woolworth's saw rapid growth in sales and profit after taking the step. By the end of 1935, when Miller stepped down on his sixtieth birthday, the corporation was resurgent. Some commentators believe that his successor, Charles W. Deyo, squandered his inheritance and that Miller's retirement as an Executive Director marked a major turning point.

Miller continued to serve as a Non-Executive Director for the next twenty-five years. He took Sumner Woolworth's place as the firm's 'elder statesman' when the Octogenerian Chairman stood down from active service in 1944. Miller's wise counsel received a friendly hearing, particularly in difficult times. He encouraged the firm to adopt the principles of self-service operation and to move off-location stores in the 1950s. The moves helped to sustain the brand. But the post-war chain was a far cry from the firm that he had led with passion and skill.

Byron De Witt Miller passed away in 1960 at the age of 85. His contibution to Woolworths was beyond measure, in Britain and Ireland, Germany and North America. A dyed-in-the-wool retailer he understood that retail is detail and that success and trust must be earned. Shareholders saw the fruits of his endeavour in their dividends, driven by the rapid spread of the red-front stores across the globe. Despite all of that, today you would struggle to find his name on the Internet, apart that is from here in the Woolworths Museum. We salute a Woolworths great.