When the guns finally fell silent at the end of the Great War, everyone hoped that it had been "the war to end all wars". Most believed the sheer scale of the carnage would stop it ever happening again, and applauded the crippling reparations imposed on Germany by the Treaty of Versailles.

But by the early 1930s it was clear that peace was very fragile. After years of austerity the Germans demanded change, electing a radical leader in Adolf Hitler to turn the situation around. The initial results were encouraging, with a major investment programme getting people back to work and starting the wheels of industry turning once again.

But the turnaround had been achieved against a backdrop of reduced civil liberties and a long state of emergency in the newly-named Third Reich.

Woolworth's HQ in New York soon found itself answering questions about whether its Founder had been Jewish, after SA men supposedly spontaneously began to picket its German stores. Executives launched a charm offensive, not only pointing out that the Woolworths had a long Methodist tradition, but listing, among other patriotic wares, Adolf Hitler Tea Sets for 50 pfennigs in its German stores. While the pickets withdrew, the problem remained, as the regime introduced regulations preventing foreign-control of local companies and preventing profits from being taken from the Country.

As Britain re-armed, large companies like Woolworth were expected to prepare their people in case of war. Staff found such drills very frightening, but clung to the hope that it would all blow over.

This page explores the war preparations taken in-store and the staff's reactions to them.

The first rumblings of war 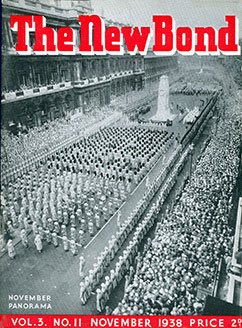 In the late 1930s memories of the Great War of 1914-18 were still very vivid for many people across the United Kingdom. Virtually every adult had lost a brother, father or son - and no-one wanted it to happen again.

When Hitler invaded the Rhineland in 1936, the world held its breath. Many people were concerned by the approach that the German Chancellor's had taken to get his country back to work. Newsreels showed factories producing planes, tanks and armaments. But no-one wanted to believe the worst. Then in 1938, when Neville Chamberlain stood on the tarmac at Croydon Aerodrome with his famous piece of paper, proclaiming 'peace in our time' while allowing Herr Hitler to 'annex' the Sudetenland, everyone sighed with relief, and, for the most part, got on with their lives.

But it was an uneasy calm. British re-armament continued 'just in case'. Although the highly visible frenzy of sand-bag filling before the meeting eased back a little, behind the scenes emergency plans were put into action. Under the banner 'Air Raid Precautions' larger businesses nominated employees to be Air Raid Wardens, sharpened their evacuation procedures and prepared their people for the worst. As the largest store in town, in many places it fell to the Woolies Manager or one of his supervisors to co-ordinate the local ARP. The stores became showcases of what was expected, and provided volunteer Wardens, Special Constables and Auxiliary Nurses. 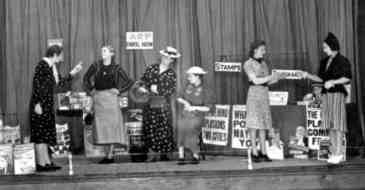 Staff remember that it all seemed funny and surreal, illustrated by the play-acting by staff from Metropolitan District Office (right). The humour lasted until they did their first gas mask drill, when all of a sudden they were struck by the full horror of what might be to come (below).

The fear of gas attacks stemmed from people's memories of the Great War, when the Germans had used mustard gas with devastating effect. In the Thirties many families still had a father or grandfather suffering the long-term the damage that the gas had done to their lungs in the trenches of World War I. As a result in 1938 every man, woman and child across the nation was issued with a gas mask. All were trained in how to wear it and were expected to carry their mask in a case with them at all times.

Responding to their training, store colleagues speculated on what a war might be like, submitting their ideas in articles and drawings for the F. W. Woolworth House Magazine, The New Bond. Some of their suggestions were funny, like Anti-Aircraft Umbrellas to be sold from the Fancy Goods Department:

But a contribution from a Pontypridd colleague was altogether more sinister as she considered the threat of a German invasion: 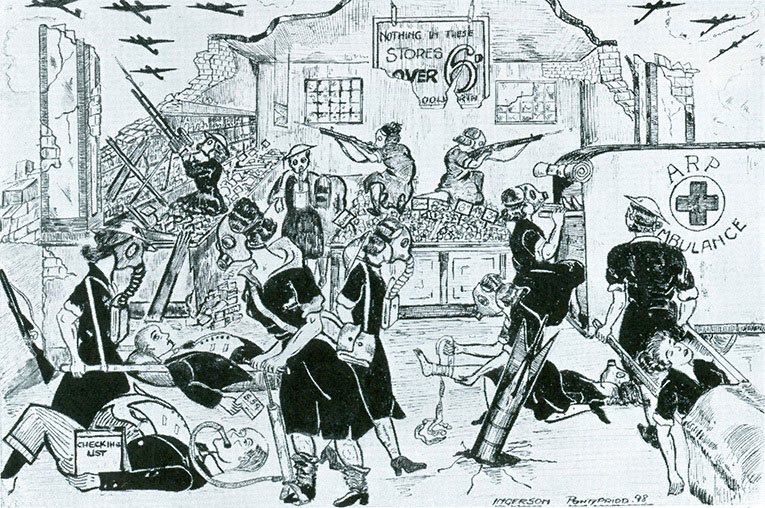 The prospect of war did not escape the Buyers at headquarters, or the buying public. Most of the toys sold in the late 1930s were war-related, with tinplate tanks and miniature aeroplanes replacing the spinning tops of happier times. The most popular plane of all featured 'The Red Baron' - no-one seemed to care that the flying ace was a legendary German!

In the final assessment only two Woolworth stores ever encountered invasion - in Jersey and Guernsey, which you can read about in our 1940s War, Austerity and Recovery Gallery, here in the Woolworths Museum, along with the story of bravery and defiance on the Home Front as part of Woolworth's finest hour.