Today everything from soundtrack CDs to t-shirts and action figures are released alongside major movies, and their royalties are essential to film budgets. A century ago it was the Woolworth Buyers that pioneered character branding. By building a new market they were able to licence images of film, book and comic characters remarkably cheaply.

This page shows some of the early products and explains why so many of stores were next door to a cinema.

The arrival of talking pictures to British cinemas in the late 1920s opened up a wealth of new possibilities for F. W. Woolworth. There were magazines and "fan-zines" about the movies and the stars. These were the Thirties equivalents of popular modern publications like Hello. The selection included exclusive titles that were only available at Woolworth's. 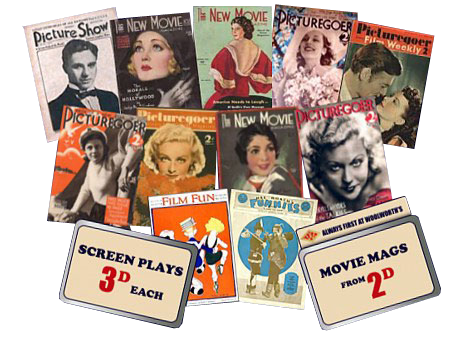 Having an American parent company proved very helpful when it came to developing good quality movie journals. The New Movie , a Woolworth exclusive, was edited in Hollywood and printed in London and New York. The release schedule often meant films were shown a few month's later in Britain, giving Woolies the chance to get ahead of the game ! 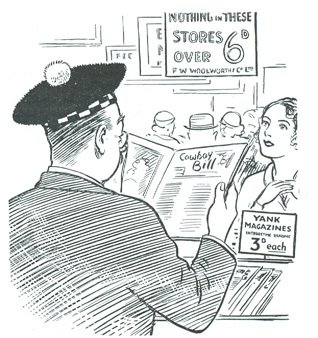 Scottish and Irish staff were surprised at the excellent sales of the American glossies in their stores. Some of the wild west magazines were offered several months after they were originally published in the USA, at the highly competive price of threepence. This was the equivalent of 1¼p at the time, or around £1 today.

A cartoonist in The New Bond , the Woolworth Staff Journal, poked fun at the men who stood thumbing the pages as their wives scurried round shopping the rest of the store. Although the titles had changed, the same thing still happened in the early twenty-first century. 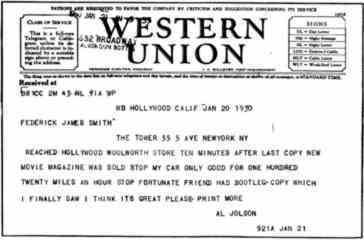 The firm's publicity team made great play of telegrams from the stars demanding that Woolworth stores carried more copies of the movie magazines to save them running out. One example of this was a cable from Al Jolson which was received on 20 Jan 1930. He complained that the Hollywood Store had already run out of The New Movie  when he called to buy one. He demanded "Please print more" ! 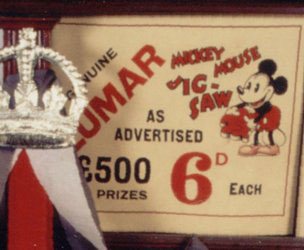 The Buyers soon spotted the high potential of movie-related merchandise. Mickey Mouse had been created by the legendary Walt Disney in 1928. By 1929 there were Mickey bendy toys. The next year the motif was added to selected sweet wrappers, and by 1931 he appeared in a set of jigsaws too!

Shoppers loved the idea of goods that featured the same characters that they had seen on the silver screen. In 1935 Woolworth tried something else, commissioning Crystalate to include some Mickey Mouse songs on its house record label, Crown. Disney obliged, allowing the retailer to buy out the royalty. The first song was called Mickey's Son and Daughter and proved a big hit; who not have a listen.

The Mickey Mouse logo is the property of the Walt Disney Company. © Copyright Disney.

The sheet music of the time included popular numbers from the silver screen. Many families had pianos at home and would have a sing-along after visiting the cinema, with mum or dad strumming out the tune and the kids joining in with the lyrics. Throughout the 1930s Woolworth's buyers made sure that the stores had plentiful supplies before each new movie screened. The stores also carried a selection of 'classics and standards'. If stock of a particular sixpenny song ran out, the chain promised to accept an order and to send a copy of the music in the post at no additional cost. 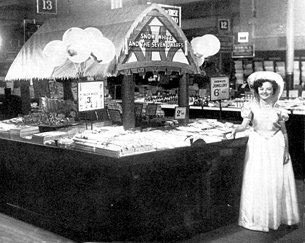 Of all the characters in the movies in the 1930s, none inspired Woolworth staff quite like Snow White. Special window displays were created up and down the country. In many of the larger branches a salesgirl became Snow White for the day, and told shoppers that her Manager would also be appearing shortly .... as Grumpy !

The seven dwarves featured as a sixpenny jigsaw with a difference. Like many Thirties puzzles, it consisted of cubic blocks with a picture on each face. The innnovation gave six puzzles for the price of one. Each branch was sent five gross (5 cases of 144) of these puzzles, with the option to order more. Even though half a million were sold before World War II, those that survive remain highly prized collectables to this day. 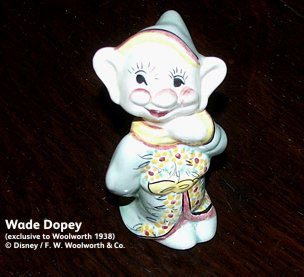 In 1937 F.W. Woolworth commissioned Wade to make a china figurine of Dopey. The design was licenced from the Walt Disney Company. Executives planned to issue one figure each year from 1938 to 1945, allowing loyal shoppers to build up a full set of dwarves for sixpence each. The price was heavily subsidised, and was intended to support a company maxim 'where sixpence works wonders'. Sadly by the time the next in the series was due, Britain was at war with Germany and the factory was busy making plates for the armed services. Dopey remains a rare and much-loved collectable today.

The character merchandise also appeared in many other departments across the store. Woolworth Buyers found that a licenced logo or motif boosted sales of products as diverse as chocolate bars, paper dress patterns, jewellery and even homewares. From the late 1920s until the 1950s the firm sold collectable salt and pepper pots. Some featured characters from the movies, others seasonal designs like Easter Egg and Christmas Tree motifs. These appear regularly as eye-catching trinkets at Antique and Collectors' Fairs in the twenty-first century. Close inspection often reveals a sixpenny price ticket, or a small 'W' in a diamond in the base, denoting that the item was originally sold as 'Woolworth best'.