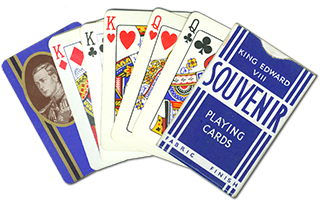 Despite its American origins, Woolworth quickly became established as a quintessentially British company. Almost without exception the Directors parachuted in from the USA chose to 'go native' giving the London-based subsidiary a distinctive identity and demanding a high degree of autonomy.

Most shoppers at the 3D and 6D Stores considered the Company to be as British as fish and chips. The view was reinforced by the way the retailer latched onto royalty, doing everything it could to support the monarchy, harnessing love of the King and Queen to position the brand at the heart of the Community. 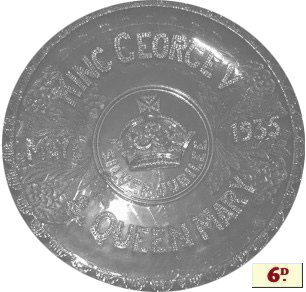 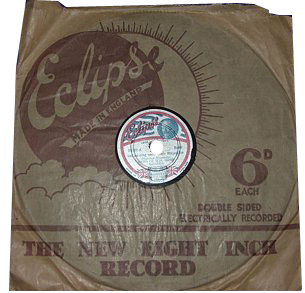 Long in advance, the Buyers planned a Silver Jubilee to remember to send loyal greetings to H.M. King George V and Queen Mary in 1935.

Their ranges were sold in the Dominion of Canada as well as in Britain. Some souvenirs were even marketed in the USA.

The hard work on supplier selection proved more useful than they could have imagined. As events unfolded the Buyers were soon back in the market for Coronation gifts for King Edward VIII, and then King George VI, all in the space of two years. Each time prices were kept artificially low to showcase Woolworth's value and its status as Great Britain's biggest retailer.

King George V and Queen Mary had won the hears of the nation. Their Jubilee sparked euphoria across the Empire. The Buyer sought special permission for the Band of H.M. Irish Guards to take part in a special project. He commissioned the Crystallate Recording Company, the supplier behind Woolworth's popular Eclipse Records, to make a commemorative souvenir. The vocals were performed by exceptionally well-spoken children from schools in Tonbridge, Kent, near the recording studios. More than a million sixpenny copies were sold in a fortnight. Our version is sixpence cheaper, and is available for you to enjoy for free.

Please note that the following pages include embedded sounds of approx. 2 megabytes. They also include an option to save a copy of the track in MP3 format, requiring another megabyte of bandwidth: 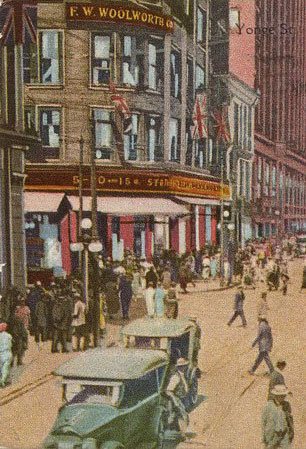 A similar effort went into the selection of mementoes, flags and bunting. Potential products were evaluated and suppliers were given large orders many months in advance so that they could build their stocks economically.

3,000 miles across the world, Toronto was preparing for a royal visit and a huge celebration, in much the same way as British cities, towns and villages were planning street parties, community events and a gift for the kids.

The royal couple planned a national and international tour to meet their subjects across the British Empire. George V was King and Emperor of India (including today's Pakistan), South Africa, Rhodesia (Zimbabwe), as well as a host of smaller counties in Africa, the West Indies and the Caribbean, in an Empire that stretched across the Atlantic to the Dominion of Canada and around the globe to Australia and New Zealand. Buckingham Palace set the ambitious goal that every nation should receive a visit during the Jubilee Year.

In Britain Woolworth aimed to supply the flags, bunting, hats, plates and glassware, and even peaches, ice-cream and plenty of pic'n'mix sweets. 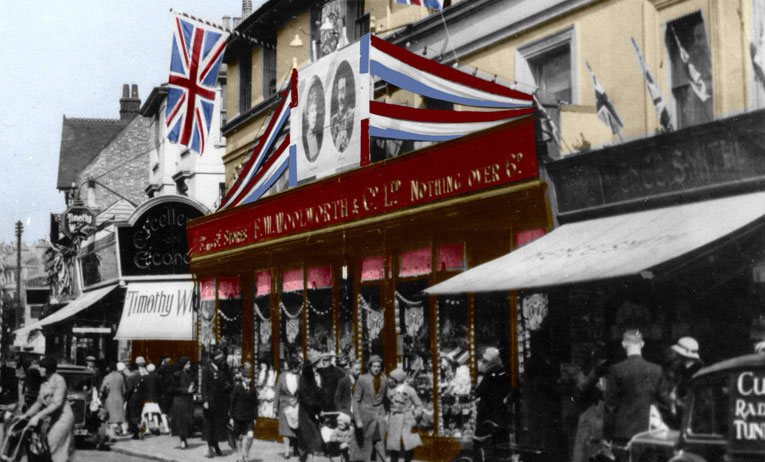 Many schools, churches and clubs wanted to lay on a gift for every child to mark the occasion.  Woolworth was on hand. It offered a generous discount on bulk orders of Jubilee Mugs, allowing organisations to save up to a third on the in-store price of sixpence (2½p) each. The mugs were manufactured in Hanley, packed in straw and shipped in cartons of one gross (144 units) for collection at the local Railway Station. 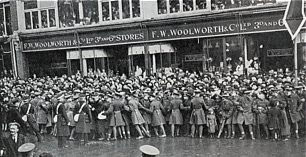 In a bitter twist, the challenge of an arduous Empire Tour tour tooks its toll. Sadly the King died in Spring 1936 before it was complete.

Huge crowds lined the streets for his funeral procession, as illustrated by the crowds in Edgware Road, London (right).

The pictures of the funeral cortège (left) were taken by one of the staff of the Edgware Road store, near Marble Arch, London, using a sixpenny VP Twin camera from the counter. The sharp images are particularly remarkable as there was no way to focus the camera, requiring a very steady hand in amidst the throng of mourners. 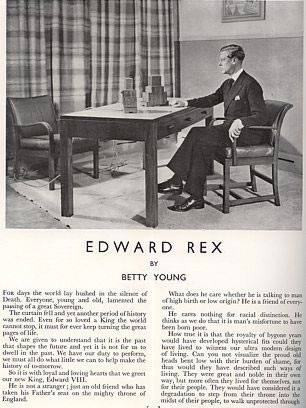 Despite his poor health, the death of H.M. King George V, was a surprise. The Woolworth Buyer set to work immediately, in preparation for the Coronation of the new King. Mugs, plates, books and bunting were all on the shopping list. Large displays were planned because Edward was well loved by his people. He had won over hearts and minds on successful diplomatic missions around the Empire, and particularly through a series of walkabouts across the United Kingdom while he was the Prince of Wales.

The editor of The New Bond, the Woolworth Staff Magazine, commissioned Betty Young to write a profile of the new King (right). She highlighted Edward's many strengths and skills, and speculated that a Coronation would take place in Spring 1937. With eery foresight Young described him as 'the most eligible bachelor in the Empire' and 'quite a catch'.

But events unfolded differently and true love stepped between the King and his Empire. Politicians would not countenance a marraige to the American divorcée Wallace Simpson, and forced him to choose. None expected that he would prefer to abidicate.

So it was that the King gave up his throne ... and Woolworth's ditched thousands upon thousands of souvenirs and collectables!

In the years after the abdication Edward and Wallace lived abroad in France and Germany as the Duke and Duchess of Windsor. Among their friends were Frank Woolworth's granddaughter and heiress Barbara Hutton, Cary Grant (who was Barbara's husband for a short time) and a small Austrian called Adolf Hitler. But that is a story for another day. 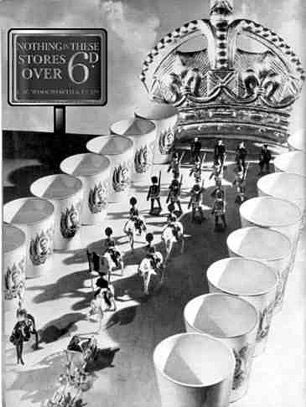 Many of the Edward VIII products never left the factories. Instead they were reworked, after Woolworth promised even larger orders for the new coronation. A few Edward VIII lines were exported to the USA and sold cheaply in the Five-and-Ten. Today these rarities are highly collectable.

The George VI lines included cut-glass plates, similar to those sold for his Father's Jubilee. To meet demand two suppliers produced slightly different versions. As a touch of the exotic store windows featured tiny model Grenadier Guards from Brittens, marching along a road lined with Coronation Mugs. The 'crowning glory' of the display was a 'gold' model of the state landau with eight horsemen in red tunics, which was offered for sixpence.

Woolworth took a small loss on the items featured in the window, but made its money back many times over on sales of flags, bunting, windmills, rattles, picnicware and tinned peaches. 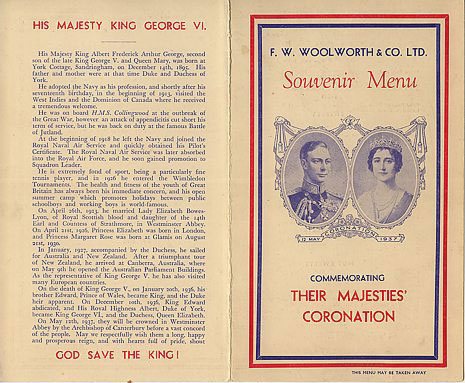 On Coronation Day, 12 May, 1937 stores were decked with flags, bunting and pictures of the new King and Queen. Many colleagues wore buttonholes and enjoyed a good sing-song in-store, with the gramophone in constant use.

In the restaurant there was a commemorative menu. Customers encouraged to keep a copy as a memento. Click here for a closer look at the menu.

At the time Mock Turtle soup was 3d (1¼p), Roast Beef and Gravy was 6d and a full three course meal with a cup of tea could be obtained with change from half a crown (12½p). 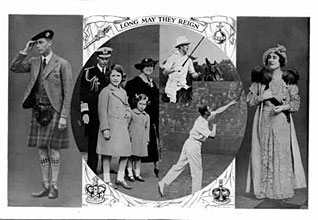 The staff magazine, The New Bond, included this "Loyal Greetings" double-page in the Spring 1937 edition.
For many colleagues this was the first time they had seen a feature about King George VI.
As the Duke of York, "Prince Bertie" had largely stayed out of the limelight.
After his accession he was constantly in the spotlight. 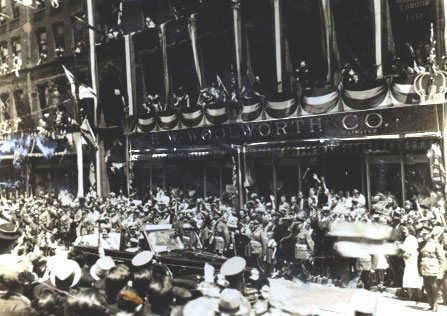 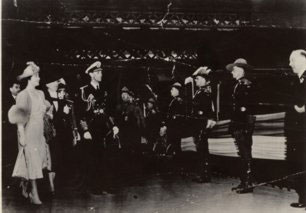 Not long after the Coronation the new King and Queen found themselves on a sensitive diplomatic mission in North America.

Tensions were running high in Europe following the German annexation of the Sudetenland and the Munich crisis. The Royal Couple's first overseas assignment was to visit the British Dominion of Canada to meet the people, before travelling to the USA to meet the President and Mrs. Roosevelt. While King George VI was a shy man who had fought to overcome a stammer, his wife Queen Elizabeth (later known as the Queen Mother) seemed a natural at public relations. The trip was a great success. Scarcely two and a half years after the Coronation King George VI and Queen Elizabeth found themselves leading the Empire in a World War. They went on to win the enduring respect and admiration of the free world.