When Frank Woolworth opened his first stores it was the fixed prices of 5 and 10¢ that set them apart. Rather than just in a single store it became a market sector.

But by the 1930s, as inflation pushed prices up, there was disagreement between London and New York about whether to change or break the ceiling.

In North America young executives felt that the limit was holding the company back, and pointed to rivals who had introduced 20¢ and even 25¢ lines and had reaped the rewards. In the even the limit was abolished and, as the Founder's Brother and Company Chairman Charles Sumner Woolworth observered "the sky did not fall".

But in Britain the Board considered its sixpenny ceiling its brand essence and resolved to maintain it at all costs. Over the following decade they went to extraordinary lengths to maintain a good range on sale while sticking to their traditional "Nix Over Six" mantra. 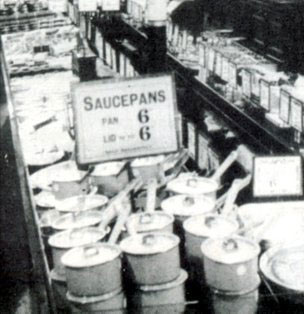 In the 1930s Woolworth raised its prices in the USA and Canada. The 10¢ maximum was doubled to 20¢ in 1932 under the Presidency of Byron Miller, acting on advice from his Buying Superintendent, Charles Wurtz Dayo. Two years later the Board reluctantly gave in to the inevitable and dropped the limit altogether. Only one Director, the veteran Chairman, Charles Sumner Woolworth, abstained. The subsidiaries in Britain and Germany were allowed to choose whether to follow suit.

The British board had no doubt. The limit was considered a virtue rather than a constraint. Maintaining it would hard, but worthwhile.

The Germans also retained their price ceiling, but dropped the reference to '25 und 50 Pfgs.' on new store fascias after 1932.

As predicted, keeping prices below sixpence was a tough challenge, despite immense buying power. The late 1930s saw significant price inflation as Britain came out of the Great Depression. The Buyers had to go to great lengths to maintain a credible offer without raising prices. Several trading partners admired the firm for passing up their offers of more expensive products with recognised potential, and instead working together on win-win tactics to reduce manufacturing costs.

Where possible when raw materials prices rose, items made with them were reduced in size, or the supplier absorbed the cost. As a result for a spell the chain dropped its ten inch (25cm) saucepans and added more six inch (15cm) models in their place. They also offered ¼ pint (142ml) tins of touch-up paint for fourpence (2p) rather than a half pint (244ml) for sixpence. But the Board insisted that quality must not be sacrificed. They instructed the Buyers to find new lines to take the place of any which could no longer be stocked within the limit. They also made clear that would accept 'cunning' ways of keeping the headline price down. 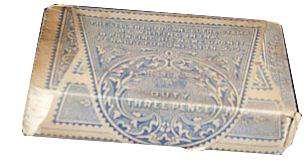 Executives later signed off a number of so-called 'cunning ruses'. For example packs of playing cards, named 'New Bond' after the firm's address in Mayfair, were sold for ninepence (3¾p), after a decision to show excise duty payable to H.M. Government separately. The inner sleeve on every pack was store-stamped to show that the anti-gambling levy had been paid. 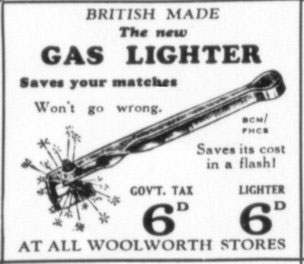 Government tax was also shown separately on a popular range of late Thirties gas lighters. Customers readily accepted that the lighter itself was sixpence and that further sixpence was collected on behalf of the Chancellor of the Exchequer. It is said that many customers wrote to 11 Downing Street bemoaning the punitive 'tax on cooking and heating', while nothing but plaudits were received at 1-5 New Bond Street.

Other items were put into smaller packs or split up and sold singly. The chain's popular own-brand and 'six o'clock' razor blades were sold in threes rather than fives. Saucepans and lids were sold individually. And Woolworth became the butt for many musical hall jokes after deciding to sell woollen socks individually rather than as a pair. Ernest Hastings included a comedy verse about the decision to sell clothing in pieces in his song 'Nothing over Sixpence' using the slang term for 6D as a 'tanner':

If you want to buy some trousers you can buy them by degrees
With threepenny legs and tanner seats and every shape to please
And you're sure to sit in comfort as they've hinges at the knees
And there's nothing over sixpence in the store.

But the Buyers were unwilling to accept customer suggestions for a workaround after announcing that they would be dropping one of the chain's most popular lines, Crown Gramophone Records. It seemed not even Woolworth was willing to stoop to charging sixpence for the disc and a further threepence for the hole in the middle, or a further sixpence for the song on the back, as some had suggested. Company rules insisted that for a price to be split customers had to be able to buy just one piece, like a saucepan or a lid. The final batch of records were sold in December 1937. In January 1938 their space was taken by a large display of tinned peaches and canned cream. 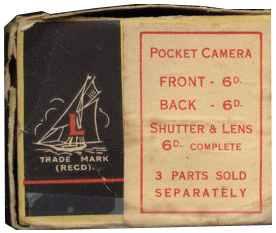 Probably the best-loved item of the 1930s was the VP Twin Pocket Camera, from Elliots. It was a great example of technical innovation; the supplier applied the latest research into plastics to create a Bakelite resin flexible enough to mould into a camera. The wonder material was used for everything except the lens, shutter and spindle wheel. Most cameras had a tortoise-shell finish, with a few sold in brighter colours.

While creating the design was expensive, mass-production to fulfil Woolworth's huge demand gave the market-beating price. When first sold in 1936 they were sixpence (2½p) each. This was a tenth of the five shillings (25p) for a Kodak Box Brownie!

That price couldn't be sustained for long. Rather than sacrifice a top-seller, it was agreed that camera would be sold as a kit.

So, from Spring 1937, the backplate was sold separately from the main camera. Each part was sixpence. In 1939 continued inflation led to the shutter and lens becoming a third component. Shoppers kept snapping them up despite the 'one and six' (7½p) price tag. Very few complained that this way above the stated ceiling.

Unlike today's digital devices that focus automatically, the VP Twin had no controls or flash. It was labelled 'outdoors only'.

The pictures on the left were taken by an Ipswich shopper in 1939 on a trip to London. The camera and a full set of prints (developed and printed back home at store 148) cost just three shillings (15p). 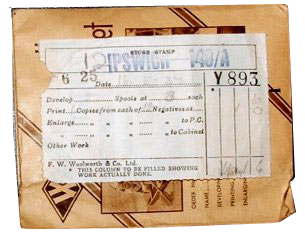 We bought the camera in its box, complete with the snaps in their original envelope with the receipt at auction. It cost a little more than the original three bob. To our amazament it worked at once and accepted one of today's standard-size films. Proof positive that built-in obsolescene hadn't been invented eighty years ago! It is hard to believe that the camera outlived the store that sold it, but it remains a quintessential true Wonder of Woolworth.