In 1930 it was agreed that the American parent company would reduce its stake in its non-consolidated British subsidiary, and allow its wonderchild to list in the London Stock Exchange. The prospectus outlined plans to double the number of stores, while also expanding the footprint and range of items available at existing stores.

In a major turnaround, the London Office's insistence on buying freehold properties, which had been seen as a barrier and a problem in New York, gave investors confidence that Woolworth UK was no pyramid scheme. Its spectacular, ever-rising profit line was built on a firm foundation of real estate. The share issue was massively oversubscribed.

The challenge for Executives was to translate the plan into reality, converting the new-found capital into bricks and mortar, while maintaining tight control over costs and building an unrivalled range of products - all for no more than sixpence. 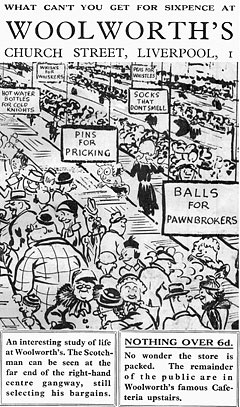 Woolworth began 1930 with 375 stores spread right across the British Isles. Most were in the larger towns and cities. During the Twenties as the leases of the original buildings had expired, instead of renewing, it had sought a larger freehold site nearby. Where possible it had bought out the existing landlord, acquired adjacent property and extended. Otherwise a new site had been chosen for a ground-up build.

Bosses at M & S and the Home and Colonial saw these larger Woolworth outlets as a threat. They had a bright, modern look and illustrated the chain's knack for pinpointing each town's highest traffic spot. Thus the arrival or renewal of a red-front often promoted competitors to upgrade or relocate themselves, normally to neighbouring or facing premises.

Throughout the Thirties, the surge continued. As raw material prices started to rise, the Buyers were able to hold back the tide. Suppliers were forced to absorb the increases if their businesses were to grow. Woolworth had found a virtuous circle; its lower prices attracted further shoppers, which helped secure even better value. Some of the proceeds were ploughed into further expansion of the store estate.

Most new branches were in the suburbs and in smaller towns and semi-rural locations, where no chain store had ventured before. Often Woolworth was invited in, and offered a prime spot and other enticements to set up shop. 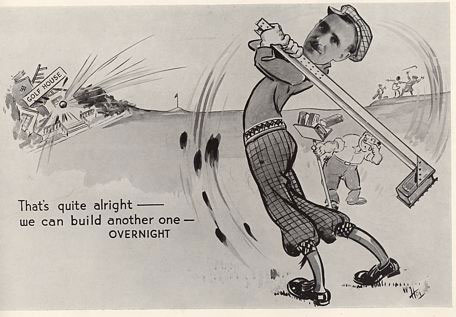 The Northern District's Construction Superintendent, B.C. Donaldson, stepped up to oversee the nationwide expansion. He planned every detail with military precision.

Teams of company builders worked round the clock, giving themselves just a day or two to recover between finishing one store and starting the next to achieve early completion bonuses. In nine years 400 new branches were added.

Most new buildings followed a standard model, like Pwllheli, Gwynned in North Wales (below, right). The builders boasted that they always added a few local twists. The repeatable formula allowed for this while still opening a store every seventeen days! 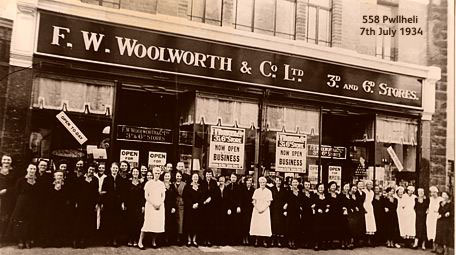 Between the World Wars the range kept changing, but the store format remained totally consistent. It is hard to believe that the two pictures below were taken nine years and two hundred miles apart.

Some locations required the personal touch, as local authorities resisted the arrival of a chain store or exercised greater planning control. The Woolworth architects would not give in. Where necessary they devised complex building schemes, some of which took many years to come to fruition. For example the freehold of the Clarendon Hotel in Cornmarket Street, Oxford was acquired in 1930. The war of wills to agree that it could be demolished and replaced by a modern Woolworth store took twenty-seven years and five different layout proposals before finally completing in 1957. A similar scheme in the Royal Borough of Kingston-upon-Thames, Surrey saw a store open in just six months in 1930. The building was then extended in stages over the next five years.

Another major development doubled the footprint of the Bull Ring branch in Birmingham's Spiceal Street. The pace of expansion had prompted the formation of a new District (Region) to oversee the stores. This was headquartered in the extended premises. Note the care taken by the Architect to maintain the symmetry of the finished store.

While grand schemes like the Birmingham flagship captured the headlines, most of the sales and profit growth of the era was generated by openings in small, local High Streets. The pace was breath-taking. Local authorities and parish councils sometimes swept aside planning constraints to attract the Threepenny and Sixpenny Stores, which they felt would help put them on the map as a shopping destination. Woolworth was allocated a prime spot at the centre of many new parades and was allowed to build using its standard design, even if this constrasted with neighbouring property. In 1934 the 600th store opened its doors in Woodcote Road, Wallington, Surrey (below, far left).

In 1936, building on the success of a second store in London's Oxford Street, the construction team set out on their boldest scheme to date. They planned to demolish the successful branch at the junction of Promenade and Bank Hey Street in Blackpool, a popular seaside resort on the North-West coast of England. It was replaced by a huge store with three large trading floors and two floors of restaurants above. The elaborate design included bright bronzework, marble cream 'Darwen' glazed bricks and a landmark clocktower and flagpole. The store was the largest and most modern of 2,000 Woolworth's across the world when it opened in 1938. It is featured separately in this Gallery.

By the end of the phoney war in Spring 1940, the chain had grown to 768 branches with an opening in the small rural town of Crawley, West Sussex. Two branches were kept mothballed and not opened. The store in Weybridge, Surrey became an 'emergency bunker', in case the 'Executive Office' in Mayfair became unuseable. The opening of Newry, County Antrim was also delayed until 1946 after the premises were requisitioned by the Local Authority.