This page is part of an interactive feature about the Woolworth store in Commercial Road, Portsmouth, Hampshire, which was one of the first a new generation of post war stores.

The original premises had been destroyed by enemy action on 11 January 1941, forcing business to transfer to the nearby satellite store in London Road in the suburb of Fratton. Most of the 25 blitzed stores. including the nearby branch in Southsea, were given the same broad look and layout.

China and Glass became one of Woolworth's signature ranges in the Fifties.

The Buyer came up with an inspired approach to finding new designs. He visited art colleges in Staffordshire and spoke to tutors, looking for the best young talent. He also sought out newcomers at trade shows and on his regular factory visits.

Woolworth stores became showcases for the brightest new designers. Mass manufacturing allowed the patterns to be made up in earthenware or occasionally bone china. The firm aimed to keep the prices low, with cups and saucers selling for 1/3 (one shilling and threepence or 6¼p).
Large pieces like teapots were typically ten to twelve shillings (50-60p or around $1).

Lots of the designs were popular, but one particularly captured the imagination of the Fifties generation.

The Homemaker black and white design, which sported a pattern made up of cartoon drawings of the latest Fifties furniture, was created by a young student called Enid Seeney. Initially the Woolworth Buyer overlooked the pattern, choosing another of Seeney's designs instead. As soon as the opportunity arose she spoke directly to the Buyer and asked him to take a second look at Homemaker, which she believed was her best work. The Buyer was uncertain, but admired the young designer's certainty and agreed to give the pattern a 'small trial'. It was a huge hit! Before long the larger stores had big wall-mounted displays featuring a complete range of pieces from salt and pepper pots right up to spectactular coffee pots and soup terrines. The teapot (above right) was one of several designs retailing at 10/- to 15/- (50p to 75p). Today's if an owner chooses to part with one of these prized collectables, they can expect to sell them for up to £200 !

The plain black cups sold for 2/6 (two shillings and sixpence or 12½p) each. The contrast with the black and white patterned saucers was striking. Manufacturing required the latest printing technology which made both the shapes and designs very different from the traditional floral patterns stocked in Woolworths. The equipment had limitations and was unable to cope with sharp curves, which forced the decision to make some pieces in plain black. 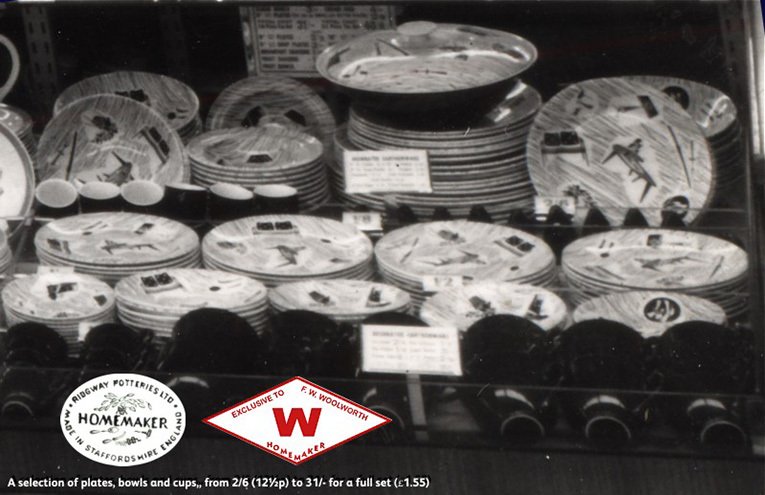 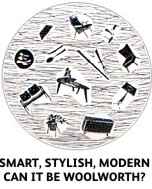 The deeper bottom shelf display, which had a greater capacity, was home for lots of pieces, including several saucers and different sizes of tea, breakfast and dinner plate, as well as egg cups and vegetable dishes. Enid Seeney said recently that she was very proud of the pattern and the jobs that it created in Staffordshire, but was paid comparatively little for the design. She first found out that it was a hit when she walked into Woolworths in Plymouth and found the back wall filled top-to-bottom with a show display of Homemaker!

Although Enid Seeney hoped her pattern would be made from bone china, Woolworths opted for cheap, reliable earthenware, which was easier to handle. Despite this, the elegant design caught the public's imagination, and proved a winner. If a piece got broken, it was easy to pop back to Woolies for another. Today the pieces remain highly distinctive and are highly prized, but breakages are rather more costly!

Glassware had equal billing in the 1950s, with big displays in every store. Despite the down-to-earth prices, which competitors found hard to match, the designs were stylish and the great majority of products were made in Britain. Both Sherdley and Jacobean glassware pieces sold in Woolworths for a few pence in the 1950s are strongly sought after today. Sherdley Glassware even has its own collectors website.