In 1942 plans were laid to take back Continental Europe from the Nazi occupation through a mass invasion from England and a push through France, Holland and Belgium towards Berlin. Code-named "Operation Overload" the landings on the beaches of Normandy came to be known as "D Day".

The Allies began amassing troops in the United Kingdom from the beginning of 1942, with liner after liner making the long transatlantic crossing crammed with General Infantrymen (GIs) from the USA and private soldiers from the Dominion of Canada.

Little did they know that they were in for a very long wait before the invasion would get underway. With so many men to accommodate, while some stayed in military barracks, many had to stay in tents, private houses, or even in the stockroom at Woolworth's!

This page is reproduced from the official commemorative handbook for the sixtieth anniversary of the D-Day Landings, which was published by St James's House in 2004 as "D-DAY AND NORMANDY LANDINGS COMMEMORATIVE ALBUM, The Enduring Legacy of the Liberation". The Woolworths Museum Author, Paul Seaton, was invited to contribute an article for the publication.

'A Little Piece of Home' 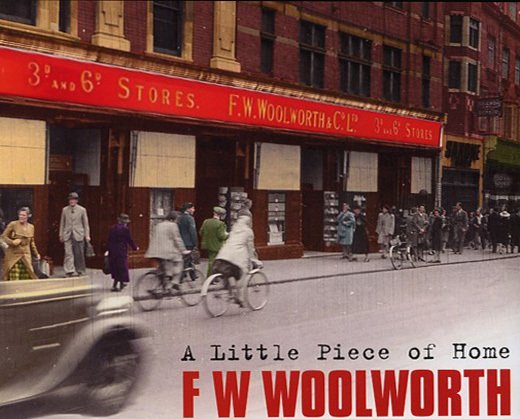 Above: North End, Croydon, Surrey prepared for the blitz in early 1940

North American servicemen landing in the UK in 1942 were handed a booklet called A Short Guide to Britain. It explained that a 'trolley' is a 'tram', an 'elevator' is a 'lift' and a 'five-and-ten (store)' is a 'bazaar. In fact, the American five-and-ten had a British cousin, the threepenny and sixpenny store, and both were baptised F W Woolworth. The stores became a focal point for many servicemen in the build-up to the D-Day landings, as 'a little piece of home', Sixty years on, GIs are still remembered with affection, as Woolworths historian Paul Seaton explains.

Woolworth was one of the first multi-nationals. Founded in 1879 by American Frank Winfield Woolworth, the store chain revolutionised retailing in the late 19th and early 20th Centuries by embracing the principles of mass production and by sourcing directly from manufacturers. By 1890 Woolworth was travelling to Europe regularly on buying trips. He established large warehouses in Sonneberg and Calais to sort and pack goods for despatch to New York, and in 1909 he opened a chain of threepenny and sixpenny stores in the UK.

By the late 1930s the company traded on three continents and had thriving stores in the main shopping streets of America, Canada, the UK and Eire and a growing presence in Germany. Buyers in London, Tokyo and Sonneberg reported back to New York. A strong corporate culture and value set were subtly adapted to suit the circumstances in each country.

The outbreak of the Second World War tested every facet of company operation. Christmas 1939 in the United States was comfortable. Sales in the United States were good thanks to a new invention, a colour Christmas catalogue, distributed free of charge in the stores. War seemed a million miles away and public opinion was strongly anti-war.

The contrast with life in the UK could not have been more extreme. The counters were unusually empty and there was an unspoken fear of gas or bomb attack. The shortages partly resulted from factories switching to war production, but the main cause was hoarding. Customers squirreled away everything from sweets to socks and from screwdrivers to stick-on-soles. 'You don't know when they'll next be in the shops,' customers murmured in the queue. Within weeks, prices had doubled and the government had introduced rationing for food and other commodities.

War presented three big challenges to the British Board:

As the war continued, conscription presented a bigger and bigger challenge. Initially only male staff were called up or volunteered, but by 1941 factories and farms needed women too. To begin with the Ministry of Labour allowed companies time to train replacements for those called up, but not for long. Training had to be improved for all colleagues, so that each key role had an understudy. Often the women who had secretly run the stores for years under the 'supervision' of young managers were at last given the recognition they deserved. The training laid the foundation for massive expansion in the 1950s with many continuing to manage stores when the war was over.

Across the UK, Woolworths colleagues took leading roles in the ARP, as well as acting as fire-watchers, special policemen and auxiliary nurses. Night after night coastal and city centre stores were bombed and day after day colleagues swept up, picked up the pieces and got right back to work. In Coventry, Plymouth, Dover and Canterbury, days after the Woolworths store was destroyed a new one opened in temporary premises. In many other towns two branches merged, with the colleagues working together and many loyal customers travelling several miles for their weekly trip to Woolworths.

From 1909 until the spring of 1940, British Woolworths stores operated under the banner 'Nothing over sixpence'. The buying team went to extraordinary lengths, working with suppliers to keep prices down, offering quite amazing bargains often at a fraction of the competitors' price. Many items sold more than a million pieces in the 1930s, securing jobs in stores and factories alike. But rapid price inflation at the beginning of the war meant an upper limit was no longer practical.

After much thought, the Board decided that, rather than introducing a higher limit, they would remove the constraint altogether - officially a temporary measure in 1940 that became permanent in 1941. Woolworths would continue to offer superior value for money, but would be able to offer a much wider range. As an example, up until the war the stores rarely sold clothes, instead selling paper patterns, needles and thread. Despite rationing, they were able to build a substantial clothing business by 1943.

The new clothing business exploited the existing supplier base, offering a wide range of garments from Pasold (Ladybird) for two to five shillings (10p to 25p). The foundations of the modern Woolworths were laid in the early years of the Second World War as the company earned the trust of the wartime generation for supplying good quality items at down-to-earth prices.

Preparations for the D-Day landings brought British colleagues face-to-face with their American cousins for the first time.

The first American servicemen set sail for Europe on 6th January 1942, and by the end of 1943 a fighting force over a million strong had been built up in the UK. Most were away from home for the first time. On arrival many were surprised to find a large Woolworths store, complete with red front and gold lettering, just like home. They stepped inside. British colleagues remember two regular questions from the Yanks: 'Are you part of the American Woolworths?' (Yes) and 'Is there any candy or Coca-Cola?' (Not much and no.) There was also a third question resolved strictly for the girls: 'What are you doing tonight?' (Nylons?)

A number of Woolworths stores provided billets for American servicemen in the stockrooms on the upper floors. For example, in Dudley some GIs spent months in Woolworths in the build-up to D-Day.

Store managers initially muttered, 'Overpaid, oversexed and over here,' but soon mellowed when the GIS started to help out around the stores, not only moving boxes and filling shelves, but also fixing leaky pipe and faulty heating. 'Boy, did they hate the cold,' remembers one manager. Among the million were more than 500 associates from the American Woolworths stores. Virtually every one made himself known at his local British store. American stores were, of course, bigger and better in every way, according to the visitors - apart from just one minor detail: they made much less profit, as British colleagues loved to point out.

Many GIs selected 'Woolies' as a meeting place in town, knowing they were assured a warm welcome. Their favourite purchases were postcards, particularly store view, and novels about the war. Particular favourites were Mighty Midgets with brightly coloured covers that sold for sixpence and had titles like Berlin for Tonight or I Captured a U-boat.

Just as everyone got used to having the Americans around, one day they were gone, off with their allies to win a world war. We're proud to have known them and to have offered a little piece of home as they passed through.

Ironically, 60 years later there's a thriving chain of Woolworths stores in Germany, years after American planes destroyed the company's main warehouse in Sonneberg, while in the United States the name has vanished as the company has diversified into fashion and clothing. In the UK, Woolworths Group floated on the stock market in 2001, an independent company after years as a subsidiary of first an American and later a British conglomerate. We're honoured to have served over six million Britons every week for five generations.

Above right (top to bottom) 1. A British worker's view of the GIs in-store from the staff magazine. 2. The team from Gosport prepare for service on the Home Front. 3.The Staff Magazine, printed in the USA, shows Brits and Yanks together in the last push to Berlin. 4. Front cover of the Commemorative Album given to D-Day Veterans as part of the 60th Anniversary Commemoration in 2004.

All images shown in the article on this page, with the exception of the front cover of the Commemorative Album, were supplied by the Woolworths Museum copyright holder, 3D and 6D Pictures Ltd.