Fire from the sky

A famous 1940 Pathé Newsreel about the Luftwaffe bombing shops in the West End of London asserts "Indiscriminate bombing is the hallmark of the Hun." It neglected to mention that it was also the hallmark of Bomber Harris of the RAF, as both sides tried to break their enemy's resolve and morale as well as their infrastructure.

Despite their limited importance as military targets, over two-thirds of the Woolworth stores in Germany were destroyed over six years of fighting, along with one-in-twenty of their sister stores in the British Isles, where the retailer also sustained damage to 326 of its buildings.

In both countries, wherever they could, the staff swept up and got right back to their counters, selling the everyday necessities to "make do and mend" and "keep calm and carry on".

This is the story of "fire from the sky" and the indomitable spirit of Woolworth colleagues and customers in the face of great hardship and peril. It was a story that saw one in eight British stores closed temporarily and one in twenty utterly destroyed. But the sister-company in Germany suffered far worse, losing 66 of its 82 stores to allied bombardment by 1945.

The uneasy calm of the phoney war was broken after the fall of France and the Low Countries, as Hitler turned his attention to a possible invasion of Britain. The German High Command hoped that the collapse in Contental Europe and the allied evacuation from Dunquerque would persuaded the British Government to negotiate a peace settlement, but misread public opinion. Instead the Luftwaffe was instructed to establish air superiority, eliminating the threat that the RAF posed to any invasion of the British Isles. In the late summer bombardment was concentrated on London's East End, before a change of tactics brought attacks on other major cities and seaports. As the country's largest retailer, with large, flat-roofed stores in every major city and town, it was inevitable that some Woolworth stores would be hit. 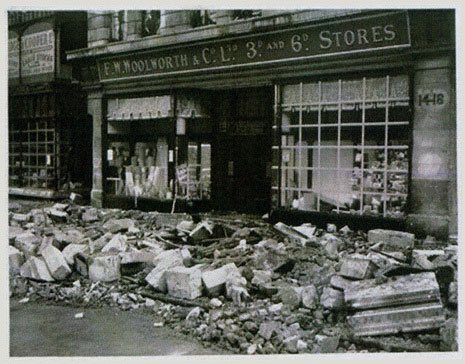 Some branches, like High Holborn, WC1 (left), which stood near St Paul's Cathedral and opposite London's famous Staple Inn, got away with superficial damage. The Luftwaffe had targeted Paternoster Square in the financial district. Damage like this was quickly cleared so trading could resume. The picture featured widely in the American media to illustrate the impacts of "the European War". The image was captioned "a London Woolworth store in the Blitz" to avoid giving specific information to the enemy.

Some people mistook the quaint appearance as leaded lights. In fact each window had been taped across to prevent injuries if it shattered. Vibration had damaged a parapet wall around the roof directly above the doors. The tapes had done their job; the large, sharp shards had been held in place. 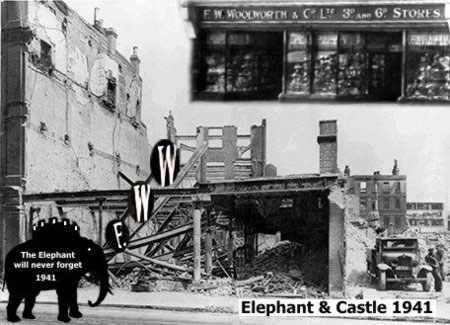 A mile or so down the road, Woolworth store '313' in Newington Butts, Elephant and Castle, wasn't so lucky. Sustained bombing on the night of 10 May 1941 set the whole area ablaze. Firefighters fought valiantly to prevent the inferno from destroying all in its path, but were unable to save the store. By morning only its flank wall and a few steel girders were still standing.

The staff were re-assigned to neighbouring stores, with half moving to Lower Marsh, SE1 and half to Walworth Road, SE17, each within half a mile. At HQ an executive updated the Elephant and Castle's entry in the master list of stores with "EA 10/5/41", indicating that it had been completely destroyed by enemy action. It did not re-open until 1965.

In the early months of the war the enemy attacked mainly by night, when most of the stores and neighbouring streets were quiet. Most damage resulted from the fires started by incendiary bombs rather than directly from an explosion.

As losses increased, particularly in the East End of London with its busy docks and factories, company bosses looked for ways to reduce the losses and damage to property, and for ways to get back up and running quickly after any incident. They called for volunteers to work as fire watchers. This involved spending the night in-store so that there was someone on hand if an incendiary bomb was dropped, both to attempt to extinguish the fire and to speed access for the Fire Brigade and ARP. Each volunteer received training and was paid danger money. The heroes went on to save countless stores. They had just the store cat to keep them company. Many branches affectionately called their Ginger Tom "Mr Woolworth"! 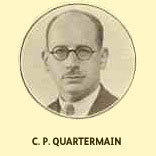 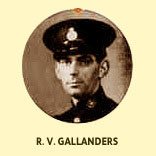 The sons of two Store Managers recall how, at the end of hard day's work in-store, their fathers would travel across town to do fire-watching in another, higher risk branch. Clifford Quartermaine (left) managed Sparkhill, Birmingham and later Rugby, Warwickshire, before travelling to Bull Ring (Spiceal Street) to stand guard at the Birmingham flagship. Reg Gallanders (right), one of the great benefactors of our Museum, used to swap his Manager's suit for the tunic of a Special Constable.

As the weeks went by, in preparation for the planned invasion of England, the Luftwaffe launched more daring raids.  Not only London but the South Coast ports and major industrial and manufacturing cities around the country were bombed. It is said the Luftwaffe command chose their targets from a 1930s travelogue guide book - meaning if the author hadn't liked the town it didn't get bombed! Among others, the Woolworth stores in Plymouth, Portsmouth, Above Bar Southampton, Southsea and Dover were destroyed in the South. Further North the branches in Hull's Whitefriargate, Norwich, Coventry and Sheffield faced a similar fate. 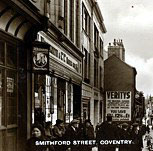 Post-war rebuilding brought utilitarian buildings without the old world charm. Survival had been a lottery. Many stores had survived intact. For example the huge flagship in Liverpool's Church Street had been unscathed, while the District Office closer to the Pier Head had been razed to the ground. Similarly Piccadilly, Manchester escaped the severe bombardment nearby. In Croydon Woolworth North End stood proud, while its smaller sister in Church Street (secretly the RAF Production Office) had been damaged on five occasions.

In the final reckoning 26 out of 767 British Woolworth stores were destroyed during the long conflict, but a further 326 were patched up by their staff and quickly re-opened after suffering damage. The worse the attack, the more determined the workers became to ensure that the enemy did not prevail. You can find out more about their bravery and bulldog spirit in another feature in this gallery of the Woolworths Museum. The German Company had been decimated in the final months of the war, while not one branch was damaged by enemy action in either the USA or Canada.