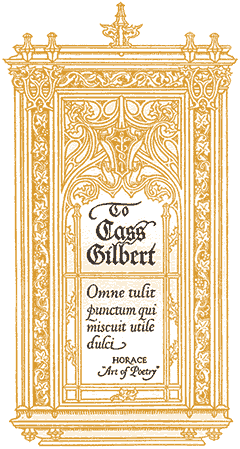 Tallest in the world

Despite his dominant position at the helm of the 5 & 10¢ Store, Frank Woolworth was unable to persuade Goldman Sachs to back his biggest idea. So he resolved to go it alone, using $13.5m of his own money to finance the construction of the world's tallest building.

This was no vanity project. He paid cash for all the building materials. He did his own marketing. And just weeks after completion, he was in profit !

Today, over a century later, while eclipsed in size, Cass Gilbert's elegant Gothic Renaissance Woolworth Building remains a much-loved feature of the New York skyline. It is also a testament to the huge buying power of nickels and dimes, despite outliving the chain of stores that financed its construction. 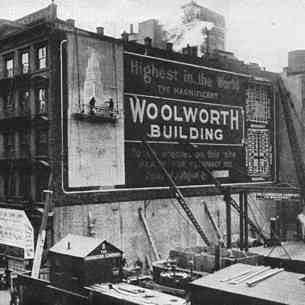 Frank Woolworth wanted to leave a lasting legacy. Rather than endow a museum or an art gallery, he had a much bigger idea.

In 1910 he secretly bought up properties on Broadway and in Barclay Street, Manhattan, until he had acquired the entire block. He engaged a world-famous architect, Cass Gilbert, and sent him to London to see the British Houses of Parliament, and to capture the elegance which was recognised the world over.

Gilbert's drawings took Frank's breath away. The structure would be huge, standing 750 feet tall, but would have a grace and style that New York had never seen. Woolworth asked that the sixty stories envisaged be reduced to fifty-five so that the ceilings on key floors could be raised, and for a height of 795 feet. He agreed to provide the highest specification materials that money could buy. His Tower would include the finest marble facings.

As Gilbert finalised his plans, Woolworth shaped a scheme to market the real estate and promote the new structure. Ignoring the reservations of others, he resolved from the outset that this would not be a vanity project. He was determined to turn a profit, and to see a quick return on his investment. 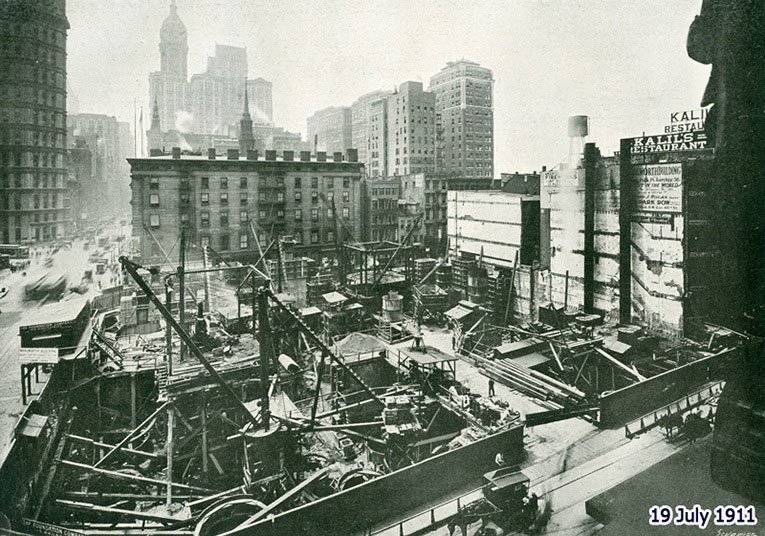 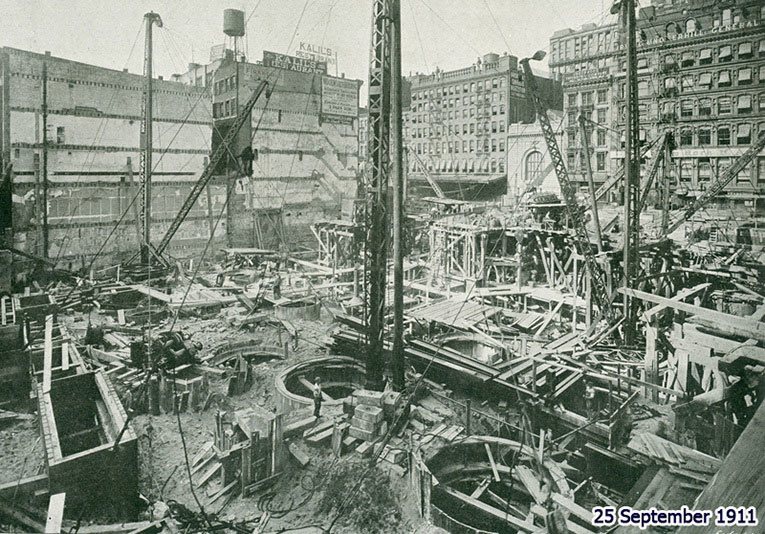 As work proceeded to lay the foundations, Frank Woolworth turned his mind to marketing the building. He developed a series of tactics which he hoped would attract big-name tenants to take long leases on parts of the building. A series of publicity stunts was arranged. 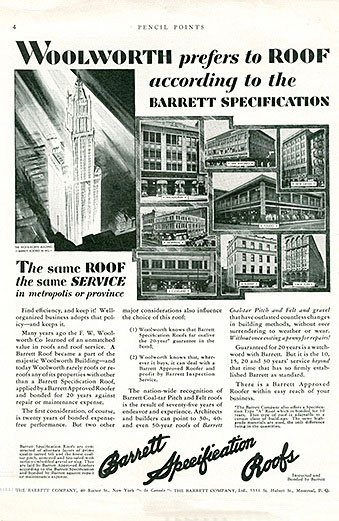 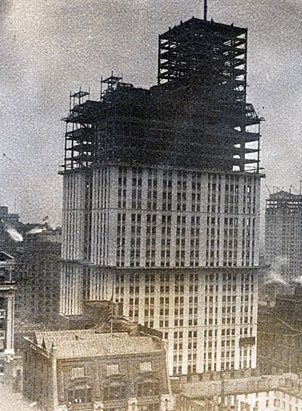 Frank drew on his experience at the 5 & 10¢. When the store's investment advisors shunned the project, which they feared would confuse potential stockholders, Woolworth simply dipped into his own pocket and put up the whole $13.5m from the dividends on his stock.

He had achieved success in Main Street by tracking the best products back to their source and buying direct. He secured big discounts by paying cash up-front. He treated the raw materials for the building as a commodity, demanding the best and paying cash-on-the-nail. Girders were purchased at the foundry and marble at the quarry, a floor at a time. He supervised every detail, and literally drove his foremen 'up the wall'! He once asked why a boy was paid to answer the phone, which he thought was extravagant. The site manager pointed out that it took a long time to shin down 750 feet of girders, a long descent for a wrong number! 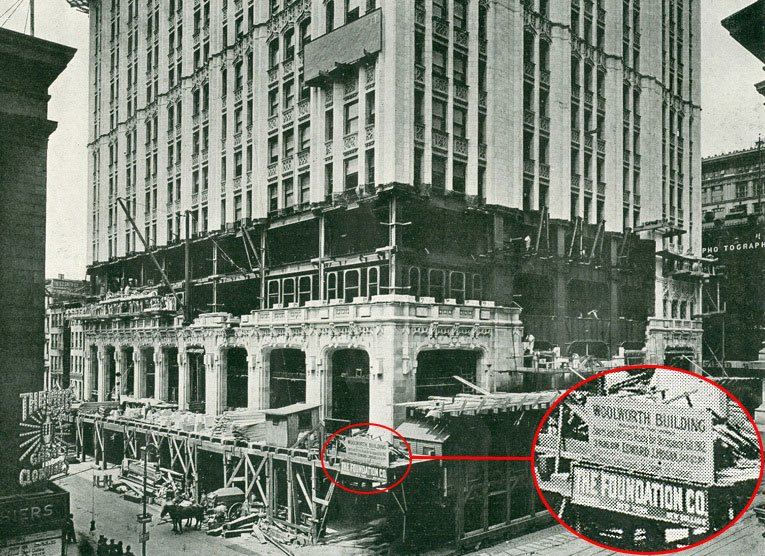 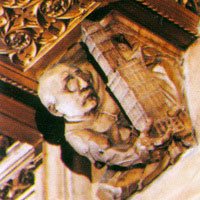 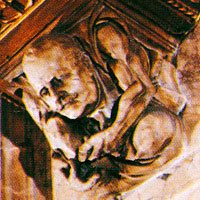 The 5 & 10¢ formula involved paring products down to the essentials, eliminating non-functional parts to mass produce at the lowest price. The rules for the Woolworth Building were very different. The Architect was given free reign to add imaginative finishing touches. His drawings included lots of ornate detail, which he was encouraged to bring to life. The gargoyles include amusing caricatures of both Gilbert and his patron. On entering the lobby, visitors are greeted by a miserly Frank counting his pennies and a proud Architect holding up a scale model of his Tower. It is said these were Frank's favourite features.

The decision to dispense with his traditional economy was a wise one. Woolworth's management company, the Broadway Park Place Co., was able to tell prospective tenants that no expense had been spared. Sure it was tall, but the building was also the most opulent and elegant in the world. This helped to attract big name corporations to rent large swathes of the landmark. The highly-respected Columbia Recording Company was among the first to take space. Many of its early gramophone records show the address on their labels. Its publicity machine told listenders that the stone-walled studios on the ground floor had unrivalled acoustics. 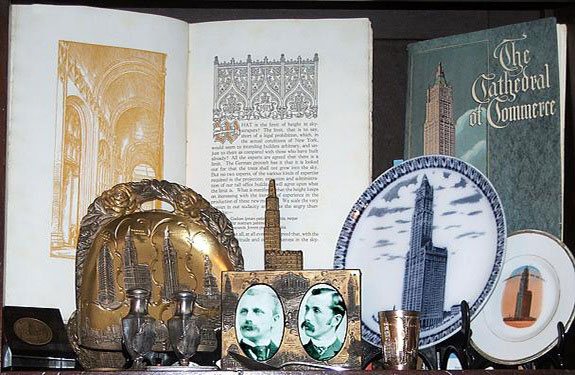 As construction drew to a close, Frank Woolworth built a range of souvenirs to sell in his stores for 5 and 10¢, and in the gift shop next to the viewing platform at the top of the Tower.

A celebration plate was struck by a British supplier, as a centrepiece to its popular 'Fibre' pattern. A German vendor produced a dainty full-colour ring tray. The selection also included brass egg cups, picture frames and crumb trays, as well as guide books, cards and stereoscopes.

The most popular and enduring souvenir was also the simplest and cheapest to make. In 1913 the British Needle Company of Redditch re-engineered its assortment of sewing and darning needles onto a 5¢ card depicting the Woolworth Building. Millions were made and shipped across the Atlantic over the next eighteen months. The line was such a good seller that during World War I, as U-boats closed the supply line, Frank licenced the design for manufacture in the USA. The original factory continued to supply a threepenny British version. Over the next fifty years versions of the line were produced in Britain, the USA, Germany and 'Occupied Japan'. 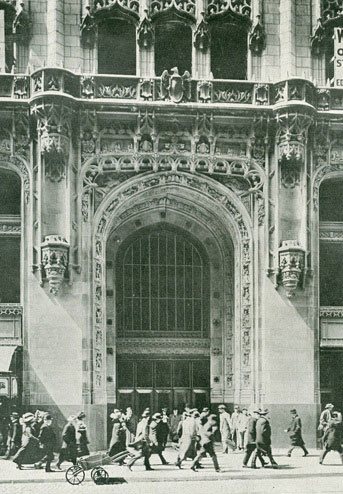 Tenants started to move into the Building in the Autumn of 1912, only 18 months after work started to sink the foundations. Labourers were still fitting out the spire as the lower floor offices were occupied.

When the hoardings were removed from the sidewalk, passers-by were able to inspect the fine detail of Cass Gilbert's design at close quarters. The pedestrains in Barclay Place show the sheer scale and grandeur of the Gothic Renaissance architecture.

The red line on the long view of the building (right) highlights the entrance, as pictured on the left.

Both the Architect and his Patron received lots of plaudits for the Building. New Yorkers gave it many nicknames. Frank liked 'The Skyline Queen' and 'The Cathedral of Commerce' (which was intended as an insult) but loved 'The Tower of Nickels and Dimes' ! 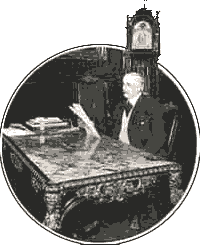 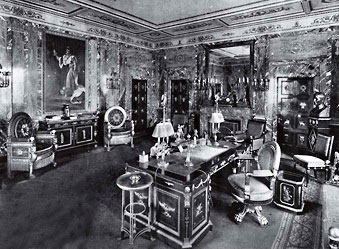 The Woolworth Building was formally opened on 24 April 1913.

F.W. Woolworth Co. occupied the whole of the 24th floor, where Frank sited an opulent private office in the Napoleonic Style, known as the Empire Room (L&R).

It also took part of the 23rd. Every other square inch of the huge structure had been leased by big-name tenants by opening day.

The building employed three hundred service men, who were responsible for everything from maintenance to lift and power operation. Each day a remarkable fifteen thousand people worked in the building, supplemented in the early years by thousands of visitors, who paid to travel up in the express lift to view Manhattan from above the clouds.

The cream of New York society attended a candlelit opening ceremony, which provided the perfect showcase for both Woolworth and his special guest, Thomas Alvar Edison. The men had persuaded the US President Woodrow Wilson to perform the opening in a unique ceremony. At the appointed hour he flicked a switch in the White House, which illuminated the building from top to bottom with bright electric lamps. The huge structure twinkled all the way to the clouds in the Manhattan Skyline. Frank Woolworth had long craved social acceptance. At a stroke he had achieved his goal twice over. The world's tallest building was also the first commercial property ever to get a Presidential opening. And, to his enduring satisfaction, it was also one of very few major building projects to break into profit by its opening day. 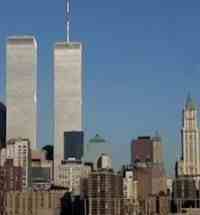 From 1913 until 1930 the Woolworth Building remained the tallest in the world. It was briefly overtaken by 40 Wall Street, followed by the Chrysler Building before the Empire State Building took the crown.

All would later by eclipsed by the twin towers of the World Trade Center, standing proud at 1,368 feet.

It is a testament to the skills of the architect, Cass Gilbert, and everyone involved in constructing and maintaining the building, that on the evening of 11 September 2001, as much of the surrounding area lay in ruins, the Woolworth Building stood tall, proud and defiant in the face of terror and bigotry. It remains a symbol of the USA's religious tolerance, and unwavering belief in freedom and free enterprise for all, which made Frank Winfield Woolworth so proud to call himself " a real live Yankee ".