In 1909 the prospect of a successful American retailer invading the UK had sparked fears, particularly in the British press.

While the fears of the Draper's Record and The Daily Mail that a P.T. Barnum like snake-oil selling Woolworth's would accumulate vast debts and then make a flit back across the Atlantic, (or perhaps sell tomahawks to the populace and turn everyone into savage natives,) had not been realised, the retailer's arrival presented both a challenge for established retailers and an opportunity for shoppers to get better value for money.

This page explores the impacts that Woolworth had on the local shopping scene over its first ten years of trading in the British Isles, covering the period 1909 to 1919. 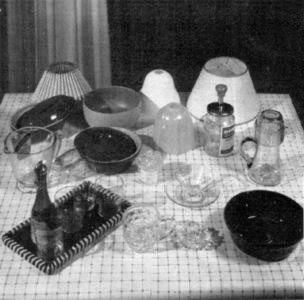 Some historians credit Woolworths with revolutionising retailing in the UK and Ireland in the early Twentieth Century. The American founders were certainly surprised at how quickly the subsidiary outgrew its parent and the brand was adopted by local people. By the outbreak of War the Board had already begun to set its own direction. Its American executives had quickly 'gone native'. Almost all chose to spend their whole careers in Britain.

There is no doubt that the British operation had gained a head-start, with the benefit of thirty years of trading experience in North America. Those early years had seen refinements to the merchandise, the marketing, the store look and the wider branding. It had required much trial and error. Based on that experience, from the first day, the goal was to build a large chain rather than a one-off store. The foundations and infrastructure were established accordingly.

In an ironic twist, the copywriters at the Daily Mail and Draper's Record actually helped the new company. The coverage drew attention to the brand, while the suggestion that Woolworth's was a circus just gave it more appeal! 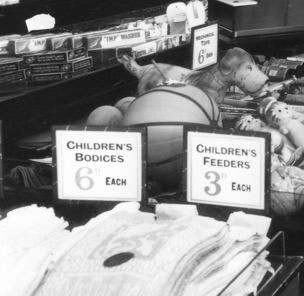 After a slow start in the first Liverpool store, the founding Directors began to anglicize the formula, progressively replacing American products with locally-produced equivalents. In the early days the upper price of sixpence was reserved for a selection of luxury items, like fine bone china, frilly lace garments, or clockwork steam engines and foot-tall (30cm) teddy bears.

Most items were threepence, with some just a penny or two for threepence. Prices were lower than in America, reflecting both the lower costs of mass-manufacture in Europe, and tough local competition. While Frank Woolworth considered The 6½d Stores to be the main competition, his local Board soon recognised the threat posed by Penny Bazaars like Marks & Spencer. It resolved that anything M&S could do, Woolworth's must do better, and cheaper. Buyers sought penny products and told stores to display these right next to the tills.

The philosophy was that long-term profits would be generated both by a twin-track strategy. Sell large quantities of cheap items regularly, and persuade satisfied customers to trade up to 'luxury' sixpenny items from time-to-time. 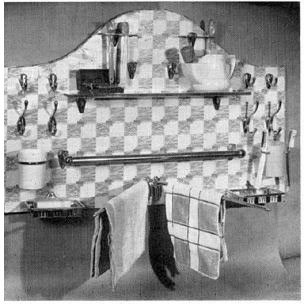 When the Buyers negotiated terms with local factories, they exploited the muscle of over 500 branches in the USA. Early orders regularly included large quantities for export and smaller volumes for sale in-store. This helped the new stores to offer well-made local goods at lower prices. Some were standard lines; others were commissioned to US specifications. A few things appeared strange when they first went on sale. A Liverpool customer stared at the Bathroom display and asked the Buyer "wot's this blawsted thing for? Wotta you do with it?"

One US tradition was embraced without reservation. Stores must build elaborate, brightly-lit window displays and update them twice a week. Over time these must showcase the breadth of the range and track the changing seasons. Every item must have a large price ticket. The goal was to draw people inside, overcoming a local practice of only entering once you had chosen an item to buy. Executives believed that their bright, enclosed, centrally-heated stores would poach custom from Marks & Spencer's open-fronted shops. 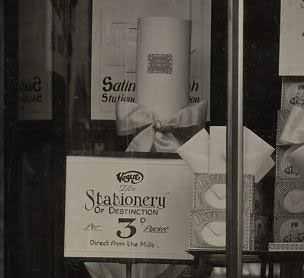 In the USA Frank Woolworth had been forced to address customer concerns about product quality in his first stores. He instructed his clerks to invite customers to pick up and inspect any item. He also backed everything with a 'satisfaction or money back' guarantee. Both policies were adopted in the UK. They proved effective in getting shoppers to buy, which in turn quickly put paid to the adverse media comment in the run-up to the first openings. 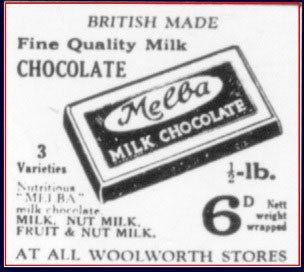 In North America the Woolworth Syndicate had pioneered the 5 &: 10¢ formula in many States as 'the only store of its kind'. In Britain there was more competition. In Northern England the 6½d Stores had more than a hundred outlets, while Marks and Spencer was the longest-established of a growing number of Penny Bazaars chains. It had already been in business for twenty-five years. Woolworth aimed to offer a broader range, including many items that had previously not been offered at fixed prices.

Quality sweets were offered for tuppence a quarter (112g for 1p or 9p/Kg) from "hygienic factories". Half pound (225g) bars of slab chocolate were offered for sixpence, as were two ham rolls for lunch, if purchased before 10am. Keen to comply with Britain's archaic laws of the day, the chain also bought sixpenny licences for permission to offer free glasses of water to customers buying meals in the store restaurant. 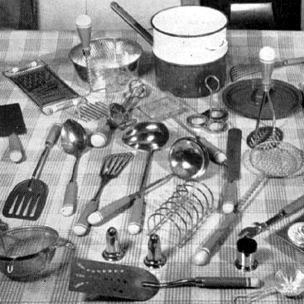 Woolworth stores offered a wide selection of goods for the home. The selection stretched far beyond the basic kitchen utensils and clothes pegs of the Penny Bazaars. The first stores offered full-size galvanized metal buckets and even bath tubs for sixpence from their displays. As a treat they also offered decorative items like small solid silver picture frames for the same price.

Popular promotions included a selection of 18 carat gold bullseye rings and fully-functioning best-brass gas lamps, each offered for sixpence. This was 2½p at the time and the equivalent at today's prices of £2.11.

The Threepenny and Sixpenny stores quickly established a reputation for offering exceptional seasonal ranges. On the first day Liverpudlians were amazed by the variety of glass Christmas tree ornaments, garlands and decorations, which were offered for a single penny. Weeks later shoppers in Preston were greeted by large displays of flowering bulbs for the same price, and snapped up three Mascari (Grape Hyacinths) for a penny, or two Daffodil or Tulip bulbs for threepence. Other 'seasonables' included a wide variety of Chocolate eggs at Easter, tin buckets and spades and windmills for threepence in the Summer, and clothes, pads and pens for back to school. Price deflation over the next hundred years meant that, while many of the items were still stocked, their prices fell, particularly in the 21st century. A number of the lines offered for sixpence in 1909, the equivalent of £2.11, were just 50p or £1 by 2008. 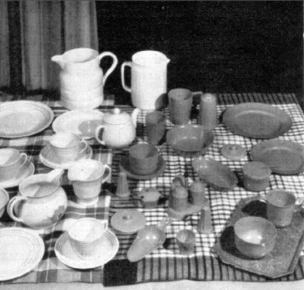 The arrival of a Woolworth's store quickly started to impact local shopping. Rival shops frequently responded with lower prices and loyalty bonuses. Many employed the same techniques that Frank Woolworth had used against his competitors in the USA, including spoiling tactics on opening day when they sold large items at a loss. Woolworth razzamatazz ensured that every opening still drew a huge crowd.

Marks and Spencer's response was more subtle. They accelerated a move away from market stalls and open-fronted premises to enclosed salesfloors. They matched the American upstart's bright lighting and central heating.

Some rivals gave up without a fight. The 6½d stores closed up before the Great War, unable to compete. Meanwhile a number of Penny Bazaar owners in the South sold out to M&S, helping them to expand rapidly.

But the largest impact and most visible impact was lower prices, as a number of luxuries became affordable to ordinary people for the first time.

In 1951, when one of the first people employed by Liverpool store retired after more than forty years service, she remembered the early days before the Great War as a very happy time. She told a reporter from the House newspaper, The New Bond  that "customers had never seen anything like it before. The wonder on their faces and their pleasure in saving so much, taught every one of the learners [Trainee Managers] that it wasn't just a shop, but a revolution."

The British government insisted on calling Woolworth's "a Bazaar", the Daily Mail fashioned the chain "a Circus" but the customers soon coined a name of their own, which was never used in the USA. For a century the shops were quite simply "WOOLIES"!