Today Woolworths the fresh people are top of the shop down under. The Australian retailer has built a strong reputation as one of the best supermarket chains in the world.

Many people assume some long-lost connection to the American 5 & 10¢ or British variety store chain of the same name. But the link is much more tentative than they might think.

It was, originally, a copycat company which slipped under the radar in the 1920s because of demarcation between the London and New York offices of the original F.W. Woolworth. It soon became a thorn in their side as word spread that it planned to open a Buying Office in London. Fighting the imagined threat kept lawyers gainfully employed in the years running up to the Seconnd World War.

Like the best copies, it improved on the original, making the switch to food stick in a way that its role model never did. This page tells more of the story.

The sincerest form of flattery 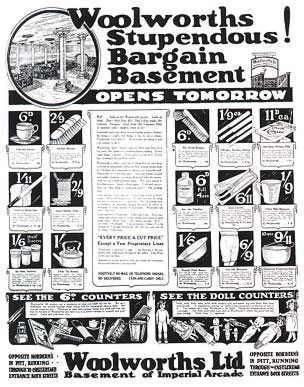 In 1924 a group of Australian entrpreneurs opened a stupendous bargain basement in Imperial Arcade, Sydney. The name above the door was "Woolworths", yet no-one working for them had that name and the 1,500-strong chain of Woolworth stores in the USA, Canada, UK and Ireland had no stake.

The name was the same, and the store look, fixtures and fittings were almost an homage to the British threepenny and sixpenny stores. But from the first day there was a major difference. The store had no upper price limit. Some of its products were nine shillings and elevenpence (49½p), twenty times the maximum in Britain.

This teaser page explores how separate companies in Australia and New Zealand got the same name and answers a question that often used to be asked by British High Street shoppers - are the Antipodean stores related to the British Woolies, or to each other? 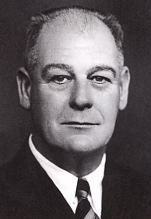 As the five businessmen developed their plans for a bargain basement value store, they needed to agree on a name. If they had followed the same convention as the five-and-ten store pioneer F.W. Woolworth, the chain would have been called H.P. Christmas & Co., after their leading light. If they had followed more recent fashion and sought a trendy marketing name, they could even have become for 'The Christmas Store'!

Instead they explored other options. One of the names considered was "Wallworths Bazaar" - a deliberate play on the British Woolworth Bazaar and the American five-and-ten. Woolworth had already become a watchword for value around the world and even appeared in some dictionaries, defined as cheap, reasonable quality, mass-produced goods.

In the exchange that followed one of the entrepreneurs, Ernie Williams, suggested going much further, naming the new company Woolworth's Limited. That name wasn't registered in New South Wales. With little to lose, his colleagues resolved to give it a go. 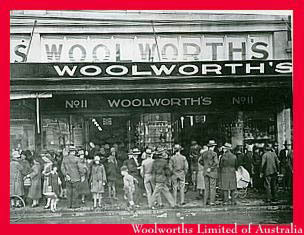 They went to the Australian Registrar General and asked to register their new Bargain Basement as Woolworths Limited. He was dubious and telegraphed the firm at its headquarters at the Woolworth Building in New York to ask if there were any objections. The skyscraper was home to Five and Ten Cent Store business. A clerk foolishly answered that the Corporation had no plans to open in Australia and did not raise any objection. He also telegraphed the subsidiary in London, which had responsibility for future stores in the Empire, to make them aware of the enquiry.

By the time the team in London had read and understood the message and prepared a response, several weeks had elapsed. In the meantime the Australian registrar had taken the cable from New York as confirmation that the giant Woolworth Corporation had no objection to another business sharing its name down under. He authorised the name.

Initially the British company appeared unconcerned, noting that 'imitation is the sincerest form of flattery'. Executives hoped that the new venture would soon fail without the buying power of the giant Corporation. But by the 1930s the Australian enterprise had taken hold and had started to expand rapidly. It had even opened its first branches in New Zealand. Concern mounted in London when rumours circulated that the Anitopodean company planned to open a Buying Office in London. Lawyers looked for a way to launch a belated objection and chose to litigate over the namesake's decision to order letterhead paper from a London supplier. After considerable expense the British won the case, but all this did was to prevent the production of letterhead in London(!). Executives believed that there was an intangible benefit from their case, because the Australians did not try to open a Buying Office in the UK.

For the next seventy years the two companies operated in their own territories, rarely bothering each other. Occasionally rival executives would meet at trade shows or suppliers, or even share common ancillary services like computing and telephony on a friendly basis. The existence of Woolworth companies in Australia and New Zealand ruled those countries out when the British firm began to expand overseas in the 1950s. The two firms pursued a similar strategy for a spell in the Fifties and Sixties. Each aimed to develop a groceries and supermarket business. The British management dithered, with many U-turns, failing to land the concept and ultimately giving up. Meanwhile the Australian Board remained resolute. They completed the transition, ultimately establishing the business as the market-leading supermarket in Australia. The chain survived some shortlived traumas in the Eighties and the sale of its New Zealand subsidiary, which now operates separately as part of a larger, indigenous Group. The Australian Woolworths emerged revitalised and heading to become the number one supermarket, a position that it still holds today.

You can follow the progress of Woolworths down under on-line: