One of Frank Woolworth's key principles was to trace products back to their source so that he could buy direct, cutting out the wholesaler. He soon found that many of America's best value fancy lines came from the factories of Europe, which had embraced mass production. The discovery was to give his business an edge over the competition and to secure fabulous riches for his Syndicate of friendly rivals.

Frank Woolworth had a lifelong love affair with Europe. As a boy he had been a regular visitor to the abandonned home of Napoleon Bonaparte's brother Joseph in upstate New York. He had read stories of battles and nobility, of fantastic wealth and opulent treasures. Later in life, as a rich merchant prince, he followed the fashion by paying researchers to trace his ancestry. This revealed strong links to 'the old country' and an original family seat in Woolley, Cambridgeshire, England, with relatives in Kingstown (Dun Laoghaire) on the South Coast of Ireland too. A fat fee even 'established' that there were Woolworths among the Pilgrim Fathers when they set sail from Plymouth, Devon, England on board the Mayflower.

He had good reason to love Europe. It had become the source of much of his success. The story began in 1890. He had struck on a winning formula for his dimestores, which were colonizing the towns and cities of the Norh Eastern States of the USA. As the chain had grown, Woolworth had become impatient with the wholesalers who acted as agents for domestic and particularly overseas goods. The Five and Ten had created a huge demand. Woolworth felt that the middlemen did not add enough value to justify their commission. He sought advice from his network of contacts. They suggested he should trace each best-selling product back to its source and buy direct. He struck a friendship with B.F. ('Pop') Hunt Jr., a Buyer for one of the country's largest toy importers, Horace Partridge & Co., who invited the five-and-ten magnate to join him on a trip to Europe. 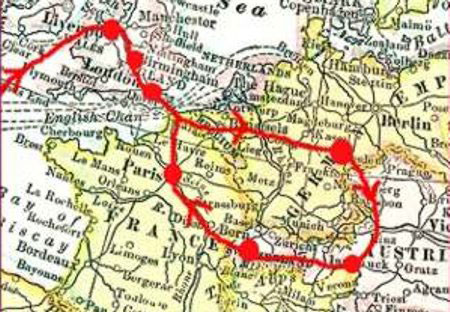 The two men set sail on February 19, 1890, bound for Liverpool. Frank left his trusted lieutenant Carson Peck in charge at home, promising to keep all of his Managers appraised of his progress and the European products that they would soon receive. His letters survive and give a fascinating insight into life in the 1890s. They highlight the faster progress that European manufacturing industry was making, compared to factories in the USA.

Frank had never sailed before. His letters reveal that he found the voyage very uncomfortable. This was to become a theme, as he never found his sea legs in over fifty transatlantic trips, prompting him always to opt for the fastest crossing available. Not going simply was not an option, given the riches generated by the European trips.

Throughout the first expedition, he held true to his word and wrote letters to his New York office for copying to the stores. These described every detail of the trip, day-by-day. 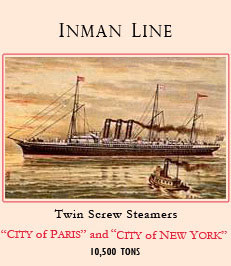 Thursday: On deck part of the day, but awful sick morning till night. Did not eat anything at all. I don't see any pleasure in going to sea. I wish I was home. Why was I such a fool to leave home?"

"Saturday: Pulled on my waterproof Ulster and managed to get up on deck. It was the grandest sight I ever saw. The waves were mountains high, fifty feet I should say... I am getting very weak and unless I eat soon I shall starve...

Sunday: The sea is calmer but I still can't eat.

Tuesday 10pm: We just passed Fastnet Light and are in the Irish Sea. Everything is calm and my sickness is gone. Have forgotten how sick I was already."

During the first crossing Woolworth told Pop Hunt about the sorts of products he was looking for. The two men prepared an itinerary for a round trip across Europe, in which they would visit the main manufacturing centres for each product group. They planned to buy china and housewares from Staffordshire, postcards and books from London, England, toys and decorations from Hannover and Dresden in Germany, clocks from Geneva, Switzerland and fancy goods in Paris, France. They would be able to make most of the round-trip by steam train, using a horse and carriage for the final furlong. Woolworth was relieved to hear that it would only take a few hours to sail across the English Channel ! 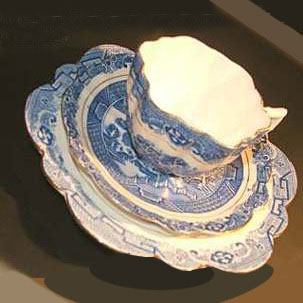 Landing in Liverpool, Frank Woolworth headed for the Staffordshire potteries. He visited twenty-five factories before finalising his choice. He placed a large order for willow pattern china, instructing that it should be shipped through Liverpool on to his in-house reshipping facility in New York City.

Commenting on Stoke-on-Trent he wrote:

The shops, we cannot call them stores, are very small and dark as a pocket. They have no street cars but tram cars run by a dummy steam engine. The cars are two story and plastered all over with advertisements.

In London he added:

They have some fine stores in London, but we have not found them. I think a good penny and sixpence store run by a live Yankee would create a storm here, but maybe not. 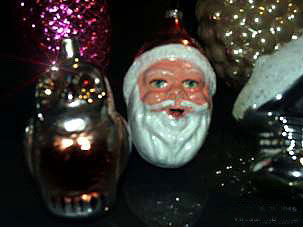 Frank bought scrapbooks and albums in London before he and Pop Hunt crossed to Germany. As they travelled through Holland, he observed that Flemish was hard to understand and admitted that he did not care for Dutch cuisine. He loved Frankfurt's fine cathedral and clean air, and regretted never learning German. The entrepreneurs headed on to Sonneberg, which was the heart of the toy industry. Frank was surprised that people made dolls at home and sold them to wholesalers, who then packed the product for shipping.

Using Hunt to interpret, Frank espoused some of the home workers. He established a "win-win", agreeing to pay them a little more to sell to him directly. This achieved big savings on some items that he had previously sourced from a New York wholesaler. It proved such a success that F.W. Woolworth Co. later constructed a warehouse in Sonneberg, which paid cash for a variety of finished goods and shipped them back to the USA.

While in Sonneberg Frank Woolworth also took the opportunity to track down the Christmas Decorations which had become a best seller at the 5 & 10¢. He shared news of his success in a letter home:

As you can see in our Christmas Gallery, these decorations played a key part in the Woolworth Syndicate's success. Many millions were sold in Frank's lifetime. Sonneberg was the principal source for the next fifty years, interrupted only during the Great War of 1914 to 1918. 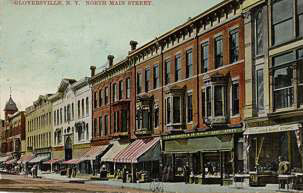 While in Germany Frank also discovered printers who could produce colour postcards, enhanced from black and white photos. These proved a hit in the USA. Each of Frank's syndicate partners requested local views for their stores, with his brother Sum offering the widest variety of postcards and lettercards, as well as local picture view books. Many survive to this day and provide a unique source of imagery for the Museum.

As he boarded the SS Etruria in May 1890 to sail home, Frank knew that he had struck gold. He returned to Europe twice a year for the next 25 years. By 1914 European goods accounted for one in every five dollars spent at Woolworth's in North America, and contributed the lion's share of profit.