The rot sets in

Kingfisher's announcement of plans to merge with Asda appeared to be the culmination of years of planning by Sir Geoffrey Mulcahy and the Kingfisher Board.

To most observers it appeared to be a win-win, which would move Kingfisher from being a pic'n'mic collection of retail brands to a much sharper value proposition, and would bolster Asda in the 'supermarket wars' which were raging among the grocers. There was a particularly strong match between the brand values of Woolworths and Asda, and many potential benefits to each company.

The collapse of the deal left Kingfisher with egg on its face. The CEO's position was undermined after his old friend and opposite number at Asda pulled the rug from under the deal.

The failure was to have major ramifications for Mulcahy, the Group and particularly for Woolworths. It came to be the beginning of the end for Woolworths, MVC and Comet as pundits clamoured for Kingfisher to be broken up.

The ill-fated "Merger of Value Champions"

In the Spring of 1999, Kingfisher CEO Sir Geoffrey Mulcahy and Asda CEO Allan Leighton stunned the City by announcing plans for a 'Merger of Value Champions' that would catapult an enlarged Kingfisher into the worldwide Retail Superleague and would give Asda access to the funds they needed to continue to grow. The Grocer had enjoyed considerable success, expanding rapidly and establishing a reputation for offering good service and very competitive prices. Of all the supermarkets, Asda had led the way in extending beyond grocery into General Merchandise. For example they had built their 'George' Clothing Brand to £500m a year. What was more a number of senior executives at Asda had worked at Kingfisher earlier in their careers. Mulcahy and Leighton were confident that the two firms were culturally compatible, they told reporters.

The investor prospectus was unusual. Unlike most merger documents, the emphasis was on growth and potential rather than savings. The document highlighted the size of the enlarged group's markets and how the new synergies would help all of the operating companies to increase their shares. It explained that, by working together: 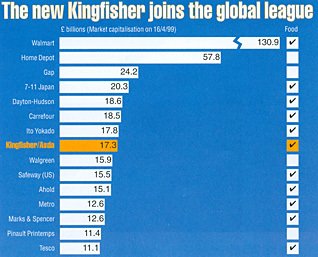 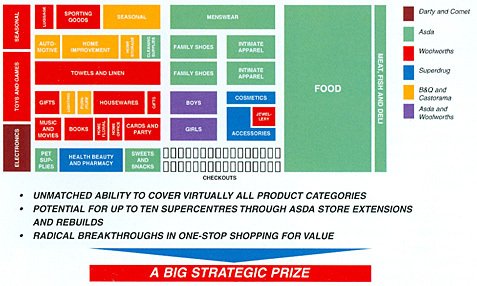 To help customers and colleagues to understand the potential of the new business, example layouts were drawn showing how a new generation of 'supercentres' offering a one-stop shop of both Groceries and General Merchandise might work (right), highlighting which operating company might source each of the major ranges to be carried. 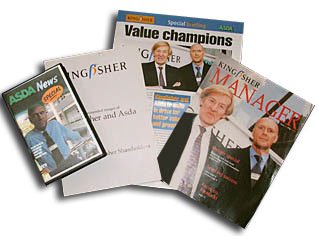 Alan Leighton had built a strong reputation at Asda for keeping colleagues informed about developments, braving up to bad news when required, but mainly sharing rewards and recognising success and achievements. His motivational skills would be crucial to setting the new Division on the right course for the third millennium.

Leighton quickly set to work getting his staff on side, alongside work to evangelise the merger to investors. An internal Asda News  video was produced. In it the CEO stood on a staircase inside Asda's HQ in Leeds and simply chatted, without notes, to his workforce. Every employee saw the film during April 1999. Kingfisher was rather slower off the mark. It is revealing that, when it came in the middle of May, Kingfisher Manager magazine was Vol 1 Edition 1.

Both companies needed approval from their shareholders. Each developed a Prospectus and sent it out for review ahead of an Extraordinary General Meeting in June 1999. The document set out in detail how the enlarged group would work, its market shares, types of store and the potential synergies. Shareholders were asked to vote 'yes' or 'no'. When the results were counted, the response was overwhelmingly positive. Over 90% of those who responded favoured the deal. It appeared that everything was on track.

But, at the eleventh hour, the Asda Chairman Archie Norman stepped in. He dropped a bombshell. The world's number one retailer, Walmart, had approached the Board late-in-the-day with an offer to buy the Asda, promising to give them the latitude and investment needed to progress their plans, and backing it up with a buying power that was second-to-none. His Board had concluded that this offer was better for shareholders and therefore had agreed to merge with Walmart. As a result Asda was withdrawing from the deal with Kingfisher with immediate effect.

The Kingfisher Board had little choice but to put on a brave face as they reassured investors. City Analysts, who were initially sympathetic, soon turned their attention to the high out-of-pocket costs incurred in the abortive deal. Editorials asked whether Sir Geoffrey had lost his golden touch, suggesting that perhaps Kingfisher had become too large and complex and had lost direction. Before long they were demanding that the Group should trim down to its core operations, suggesting that it should focus on DIY. In the simple headline of one red top newspaper, 'it Asda be somebody's fault'.

Ten years later, meeting with the writer at his club in Pall Mall, Sir Geoffrey remained bitter about the Asda affair. In retrospect he believed that the decision by Asda Board's had set the changes in motion that ultimately led to the closure of Woolworths' High Street stores. He acknowledged that it was a difficult choice for Asda and still believed that they chose the wrong merger. It is said that those who were Asda Directors at the time now have some regrets about the decision. But what is done is done.