Pic'n'mix and shelves of neatly stacked bar lines became a defining range of the British Woolworth's, featuring at the front of the stores for their whole century in the High Street.

While a hundred years saw many fashions change, a few lines graced the displays throughout that time, remaining popular favourites throughout.

An innovative idea introduced to the North American stores in 1886 continued to drive sales more than a century later.

On this page we explore the early history of the UK confectonery offer. 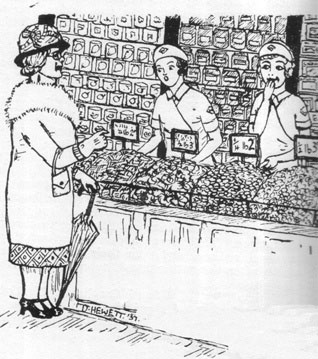 F. W. Woolworth's High Street stores in the UK stocked a wide range of weigh-out sweets, countlines and boxed chocolates through a century of trading. The idea took shape in the USA in 1886. Today a trip to Germany, Jamaica or Mexico is required to buy genuine Woolworths Pic'n'Mix.

In Summer 1909, as Frank Woolworth searched the UK for locations, his new Buyers in Liverpool sought local suppliers of boiled sweets, mints, toffees and chocolates to rival the popular Stateside offer. They agreed terms with Barker & Dobson, whose Everton Mints proved a particular hit. Initially they had to resort to importing most of their lines from New York to fill the first store in Church Street, as suppliers geared up to supply a full selection the following Spring at the next outlets in nearby London Road, Liverpool and Fishergate, Preston. Before long the mahogany counters were crammed full with sweets in shiny foil wrappers from factories across Britain and Ireland. Pic'n'mix was just two old pence per quarter pound (125g), the equivalent of 6.55p per kg at the time, or 56p per 100g at today's prices.

Shoppers in the early stores marvelled at the selection, cramming bags at the personal service counter, and adding half pound (227g) bars of chocolate for sixpence (2½p) and wafers for tuppence (1p). By 1930 Woolworth had become the dominant sweet shop in both Britain and the Irish Free State. It held on to the lead in the UK hroughout its life in the High Street. This page explores how it all began. 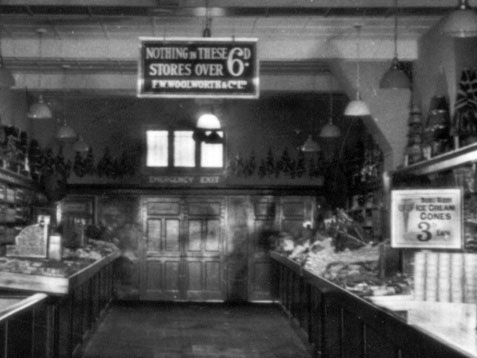 In the early days the stores sold ice-cream alongside 'weigh-out sweets'. The firm finally recognized the nickname give by shoppers in the 1950s. For years customers had called the offer 'pic'n'mix'.

In Edwardian times few shoppers had access to any kind of refrigeration at home. Domestic freezers would not become popular for another fifty years, making the ices a particular novelty. Shoppers flocked to buy two distinct types of ice-cream. Cones were a treat to eat at once, while 'sandwiches' were slabs of ice-cream between two wafers, which were tightly packed in bleached paper to keep them cold for the journey home. Each store had a special fridge with two sections - 'very cold' for the cones and 'arctic' for the sandwiches.

Restaurants and tea bars always carried ice-cream deserts on the menu, often an accompaniment for tinned fruit, with Arctic Peaches the top seller.

Frank Woolworth had recommended that his cousin Fred, who led the British Company, should source the candy from the estabhlished supplier base in New York state. But the new MD's meticulous market research soon revealed that British factories were much more efficient, turning out the sweets much more cheaply and reliably, and with more imagination over flavours and styles. He instructed the Buyers to humour Uncle Frank by telegraphing an opening order to the 5 & 10¢'s reshipping warehouse in 6th Avenue, New York, which would tide them over until they had agreed terms with local suppliers like Barker and Dobson, which he had inspected personally.

Between July and October 1909, the buying operation was headed by William Stephenson, the first Englishman to join the leadership team. Keen to prove his worth, the young man toured many factories, large and small, in search of the right sweets. Before the first store opened its doors he visited Cadbury's at Bournville and agreed occasional specials on their slab chocolate, and had secured supplies of Everton Mints and other boiled sugar candies from Barker and Dobson. He had also chosen sources for Licquorice Allsorts, Chocolate Bon Bons, Toffees, Nougat (known as 'nugget'), Gum Drops and Peppermints. By opening day Church Street had twenty different English varieties, which were all priced at tuppence (1p) per quarter pound, which was the equivalent of about 56p per 100g at today's prices. They outshone the similar lines sent from New York, which were sold through and dropped.

Besides the merchandise, Stephenson also had to shape the displays. He commissioned one of his china suppliers to mould and then kiln-fire clip-together bright white porcelian bowls to his own specification. They were square on the outside and rounded on the inside. Each could hold around 7lb (a little over 3kg) of candies, and slotted together onto the top of a standard mahogany island counter, behind a sloping glass panel on the customer side. The supplier excelled, wrapping the finished masterpieces in straw and loading them onto a horse and cart, for the 56 mile journey up the A51 from Hanley, Staffordshire in the English Midlands to Liverpool on the North West coast.

On opening day the "Light Refreshment Department" looked magnificent, dominating the side wall to the left of the main entrance of the Church Street store, and stretching half the depth of the store, to the turn into the Williamson Street gallery where the cheaper penny goods were displayed. It carried bottled mineral water alongside the sweets and was bedecked with flags and signs, with the sweet wrappers and ornate golden cash registers glistening under the electric arc lights. On that first day several sweets made exclusively for the Company were marketed under the brand name Milady. The best sellers were toffee, butterscotch, clotted-cream fudge and raspberry ruffles (chocolates with a fondant centre). 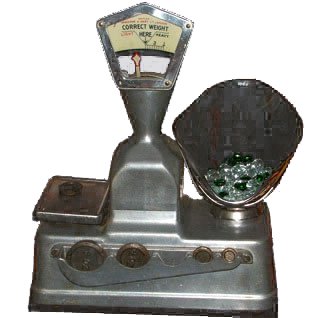 'Verity Level-Proof' scales were chosen for the Sweet Counters. They were also used to weigh broken biscuits which were displayed nearby. The stainless steel units featured a set of imperial weights from one pound ('1lb' or about 0.45kg) down to a quarter of an ounce ('¼oz' - 7.08 grams in the metric system). The customer's selection was placed in a chrome-plated scoop. The Assistant then added weights to the other side of the scale. When the two balanced, a diamond-shaped marker pointed exactly to the words 'Correct Weight Here'. 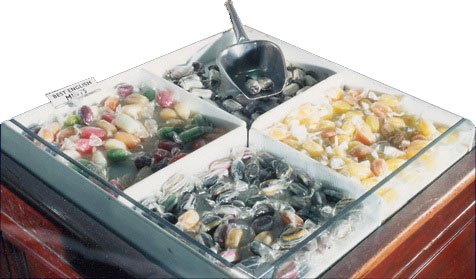 During the 1910s and 1920s the displays had to be filled up several times a day. Staff served from the centre of the island counter. There were cupboards below the display, called the 'understocks', which kept the reserves close to hand. The assistants had to call the supervisor for the key when they needed more stock.

Larger glass fronted counters were introduced when stores were extended in the late 1920s and 1930s. These had enough space for 28 lbs (12.7 kg) of each variety. On busy days even these had to be topped up at lunchtime!

One side of the counter was used for sweets and the other for biscuits and nuts. 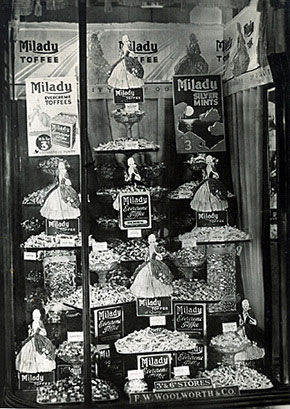 New sweets got star treatment on both sides of the Atlantic, featuring in elaborate window displays. Three suppliers competed for space in the UK, offering special fixtures and showcards in a bid for favour, knowing that such features boosted sales ten-fold. Unknown to customers, they supplied plaster sweets for the window which wouldn't melt. Those who reached in for a nibble never returned for seconds! 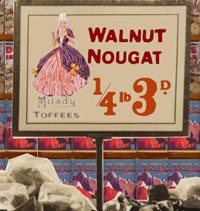 By 1930 Milady Sweets were the runaway best sellers across the British Isles. The supplier's recipes, coupled with their eye-catching logo, had won a loyal following. Good marketing had persuaded customers to trade up, paying an extra penny per quarter pound for more exotic varieties and a richer taste. They were still a bargain at just threepence a quarter (£1 per 125g today).

The 'Milady lady' often emblazoned the main windows in the High Street. She also appeared on the counter tickets, which were the only ones on the confectionery displays to feature full colour printing. 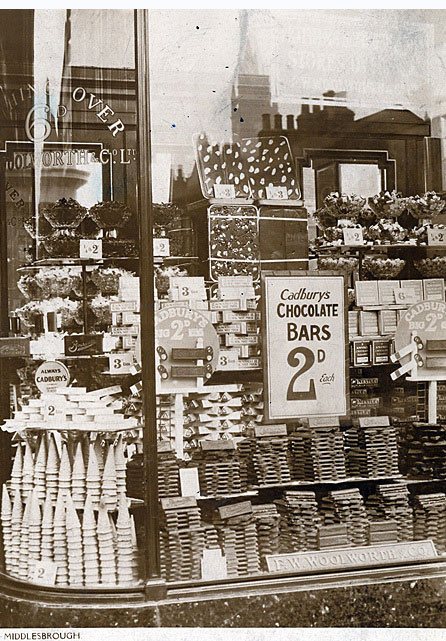 To complement the weigh-out sweets, the Buyers sourced an enviable range of packaged confectionery, working with suppliers to shape the range. Cadbury led the way with fudge and chocolate candies to complement their traditional slab chocolate.

Executives followed the Frank Woolworth's original tactics, always having two suppliers for each major product-type and playing one off against the other.

For example the Buyer teased Cadbury that shoppers were passing up its delicious, luxury chocolate in favour of similar bars from Melba which were better value. Cadbury rose to the bait, offering a three ounce (85g) bar for tuppence (1p), to be promoted in the store windows (right). 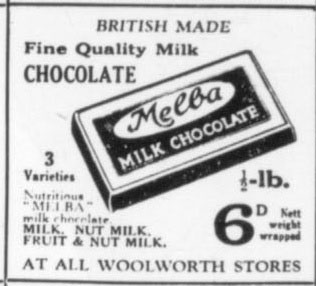 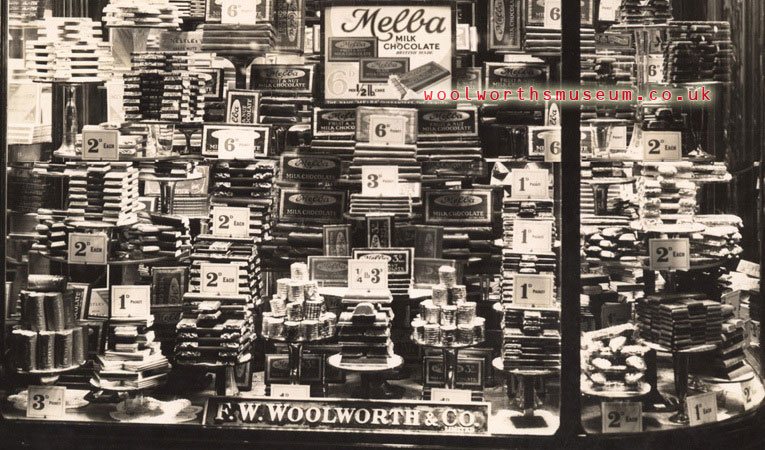 Playing one supplier off against another was a key tactic in holding down prices, despite inflationary pressures in the late 1930s. They were forced to make economies behind the scenes, or accept a lower margin, to maintain their level of trade with the High Street store chain, which accounted for the lion's share of their turnover.

In North America Woolworth began to introduce more packaged lines. They enjoyed good sales on bagged candy, finding shoppers who preferred this to their weigh-out range. The London Buyers followed the lead and introduced a special fixture to display hanging bags of boiled sweets in 1938. At the time the 'Woolco' own brand name also appeared on haberdashery in Britain and on the German Woolworth's 78rpm records. 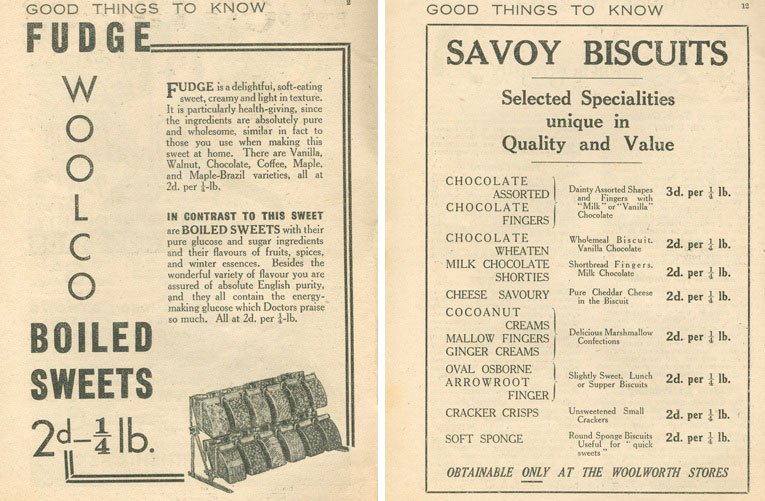 By 1939 Woolworth had established an unrivalled confectionery business, dominating the British market and selling vast quantities of pic'n'mix sweets, chocolate and candy bars and biscuits. Such was the chain's stranglehold on the market that most rivals were forced to keep their sweet prices under sixpence, sacrificing margin to remain competitive. Just a year later the world had changed. The abundant displays had disappeared, as Britain went to war. Find out more in our World War II and post-war rationing exhibit here in the Woolworths Museum.