The Mark of Value

Drawing on the latest marketing theory from the USA, in 1963 Woolworth began to move from operating many private label house brands to a single own-brand called Winfield.

Initially the low entry price point range offered jaw-drop prices for well-made everyday items, but over time quality was sacrificed in the face of increased competition, until the name became the very definition of cheap and cheerful, and an example of how the chain was losing its way.

Launch of the Winfield own brand

There was an emerging trend in the Sixties for retailers to develop own brands, rather than simply selling exclusive merchandise in plain wrappers. British Home Stores had Prova, Tesco had Delamare, Littlewoods had Keynote, many will remember St Michael from Marks and Spencer, fewer St Margaret, their women's brand.

Woolworth already had a number of exclusive brands, each for different types of product and from a single supplier.  For example paint from Donald Macpherson and Company was branded "Household" and records from Oriole were branded Embassy.

Then in the 1959 they launched an own-brand for Groceries called Kingsmere.  The canned items were made by the Goldenhanger Fruit Farms Ltd. but other suppliers including Weston's Biscuits also manufactured Kingsmere branded products.  Company folklore said that Kingsmere was the name of Frank Woolworth's British Bulldog, but it is more likely to have been the suggestion of some market research boffins, particularly as archive documents reveal that the firm also registered the trade name Queensmere.

Interestingly, despite repeated requests, Pasolds were not allowed to mark their clothing items "Ladybird". Woolworth executives repeatedly insisted on leaving the garments unbranded, though their colleagues in the new-born out-of-town off-shoot Woolco disagreed and signed a franchise arrangement to sell Ladybird Clothes in their Department Stores.

In 1963 the Board launched a major re-branding exercise to move all exclusive merchandise to a new label called 'Winfield'.  The brand guidelines were clear that every item had to be better quality than the supplier-branded equivalent. 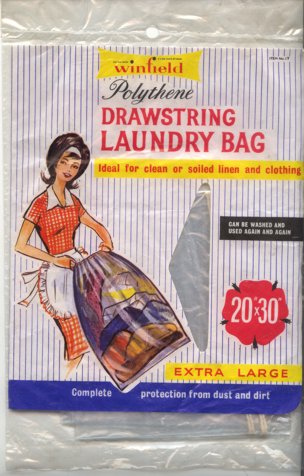 Every item was backed by a complete money-back satisfaction guarantee, and all packaging was designed by the Company's own experts, to ensure a consistent visual presentation across the range.

Some of the early items in the Winfield range were of superb quality. The packaging and labelling were ahead of their time.  But marketing a brand which spanned drain cleaner and perfume, drinking straws and ant killer, bras and brass cleaner proved difficult.

Despite a heavy advertising spend, the Winfield brand was never considered to be as good quality as the branded equivalents.  Customers considered it acceptable for household goods and paper products but never really for fashion or for gifts.  Despite this the company persisted with Winfield branding until 1983.