Over the years, the Board of the British Woolworth proved indecisive about whether to stock groceries and provisions in the stores.

Some generations of Executives appreciated the regular footfall and high volumes that the range could bring, while others considered that the shelf space could be more productive with higher margin ranges, avoiding the time and expense to deal with hygiene regulations and perishable ranges.

The result was a confused offer to the customer, with food displays here today, gone tomorrow and then back again. 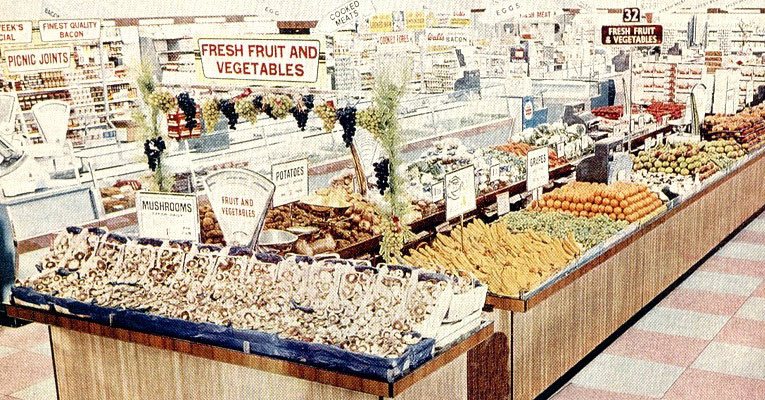 Woolworth obtained permission to stock fresh fruit and vegetables from the Board of Trade in 1956. They were among the first variety stores to break through legal barriers which prevented non-specialists from mounting a full offer of food in-store. Over the next decade a vegetables and fresh fruit were introduced into more than 700 branches as part of a food. Despite the rapid roll-out the effort was often half-hearted as executives dithered about the role of groceries and whether they were prepared to accept the lower margins. 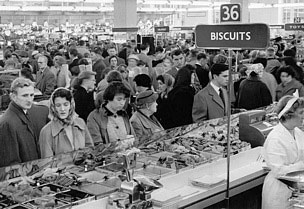 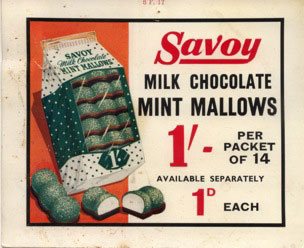 Weigh-out biscuits were first stocked in 1920. They were an instant hit. Both the 'perfect' grade and 'broken biscuits' were competitively priced.

The range was phased out in the Seventies, Even packet biscuits were dropped in 1985 along with the whole food offer. 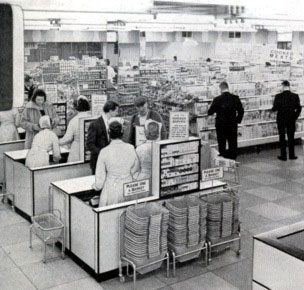 A tinned goods department had been introduced in 1937, bizzarely taking the place previously occupied by gramophone records towards the front of the shop. Tinned fruit and canned cream had proved very popular. During the war tinned snook and whale meat had been altogether less appealing.

In the early 1950s the chain had started to toy with a more comprehensive grocery offer. Early results were pleasing. During the 1960s they had to decide whether to sell food in the smaller stores. For a brief moment the firm had the chance to become one of Britain's first modern supermarkets. Such self-service grocery stores were proving popular in North America.

Executives dithered. Research suggested that 'daily products' would encourage customers to visit the stores every day or two, rather than just once a week. But food had lower margins and would force them to switch to a self-service operation, which company bosses felt would be unpopular. 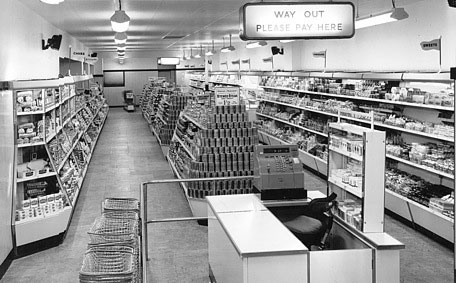 In the end a compromise solution was found, where the food section was separated from the rest of the store and marked "Welcome to Woolworths Self Service, please take a basket".

As a result many Woolworth Food Halls were located at the rear of the salesfloor or on an upper or lower floor. This encouraged customers to browse the traditional ranges en-route for the supermarket section. 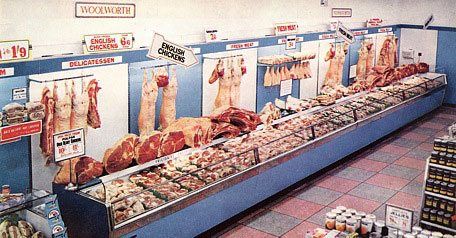 Separate plans to develop out-of-town shopping at Woolco provided access to new ranges of butchery and fresh fish. These were introduced into selected City Centre stores to help improve the chain's economy of scale. 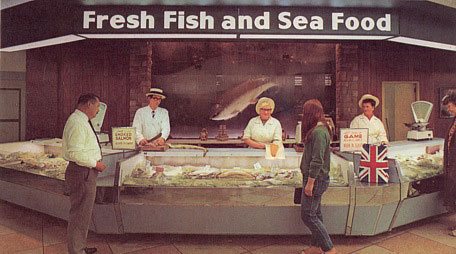 A major extension of the branch in Wolverhampton to join the City's Mander Centre was used to test the Fresh Fish and Sea Food counter concept. The look would not be out of place in a supermarket in the twenty-first century, over forty years after the picture was taken. Sales were good and shoppers responded positively to the new range, but the pay-back was considered too low to justify a widespread roll-out. 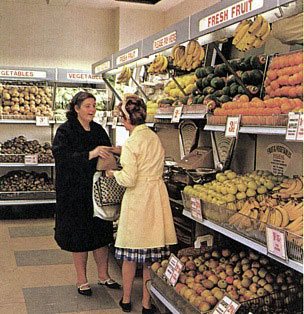 The Woolworth management spent much of the Sixties pushing the sale of greengrocery across the stores, before unceremoniously dropping the idea from 1971. Measurement work had shown that the labour costs to manage the range and serve on the department were much higher than they had anticipated. The economics only worked in the largest Food Halls and at Woolco out-of-town.

Across the other side of the globe, another chain called F. W. Woolworth in Australia and New Zealand (which was unrelated) pursued the same strategy with much more resolve. Today Woolworths has become Australia's largest supermarket. By contrast, in Britain the dalliance with groceries ended abruptly in 1985, before making a half-baked return at Woolworths General Store and Big W from 2000-2003. Food for thought?