The Twenties were a golden age for Woolworth around the world.

As Britain entered a new age after World War I and Ireland took its first tentative steps as a Dominion and a Free State, the store formula took hold as a more modern form of retailing. It helped to sweep away old traditions like having to choose an item to buy from the window before entering a shop. As the chain grew so did its economy of scale. Shoppers found values on the counters that had never been available before, and told their friends. More than 300 outlets were added between 1920 and 1929.

Expansion continued in North America too, where new leaders maintained the momentum that Frank Woolworth had created. Emulating the success in the UK, a subsidiary was launched in Weimar Germany to great acclaim. Meanwhile demaraction issues between London and New York brought a protracted, fractious row about the British Board's love of freehold, purpose-built stores, and allowed a copycat chain in Australia to creep under the radar and establish an unrelated F.W. Woolworth & Co. Ltd. chain down under.

New ranges included gramophone records in the UK, and lots of merchandise related to the movies on both sides of the Atlantic, including the first character-branded products.

The Roaring Twenties at Woolworth's 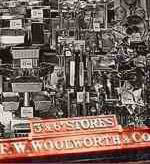