Just five years after the first Woolworth store opened in the UK, the country went to war against Germany. Recruiters targeted large shops because of their city centre locations, and persuaded all of the male staff in several branches to enlist, promising that they would all train and serve together.

The promise that the war would be over by Christmas neglected to mention that they might also all die together.

Fifty seven colleagues from the 44 British Woolworth stores volunteered for Great War service.
Less than half of them returned. We also remember Associates from the Canadian and American stores who fell far from home. 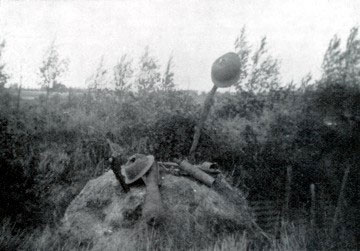 An open trench in Santuary Wood, Flanders, photographed by Miss C. Rowe of
Woolworths Wimbourne in 1938, as a reminder of the "war to end all wars".
A year later Europe went to war again.

They shall not grow old as we who are left grow old,
Age shall not wither them nor the years condemn;
At the going down of the sun and in the morning,
We shall remember them

'Your King and Country Want You' by Paul A. Rubens
performed by Maggie Teyte (Soprano)
on Columbia Record No. 495
Columbia Records, Woolworth Building, NY 1002, USA MCMXIV
with thanks to CBS and their predecessors the Columbia Gramophone Company