The Little Wonder label proved to be a smash hit when it was introduced in North America in 1915. At the peak the 5 & 10¢ sold upwards of half a million discs a week. 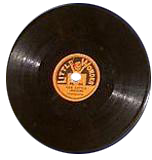 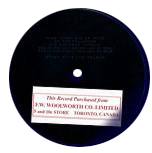 They were single-sided and ran for just over a minute. Because of their small size they were made to play at 80rpm. The first discs were 5" in diameter, which later increased to 5½". Each was sold without a sleeve for 10¢.

This song was one of the best sellers; the mechanical recording method worked particularly well with the vocal quartet, still giving a reasonable sound almost a century after the disc was released.

The record you are sampling is:

Right click the link below and select "Save as..." if you want to save a local copy