By 4 August 1914, when Great Britain declared war on Germany, the Woolworth chain had grown to forty-four stores, and included branches in England, Wales, Scotland and Ireland. All of the expansion had been funded from profits, and, after an initial flurry of volunteer managers from the USA, a training programme provided Managers for each new store and all were entirely staffed with local people. Many further openings were planned, with a goal of establishing 100 stores within 10 years of the first opening in Liverpool.

Suddenly everything changed. Many male staff enlisted, from Store Managers and Stockroom Men to Builders and Joiners. Expansion plans were scaled back, but not abandonned. Training was intensified as a foundation for growth once peace was restored.

The pre-war branches were known as the 'Pioneer Stores' and were treated with a special reverence throughout the chain's heyday. Frank and Fred Woolworth and their property experts, E.J. Smith and Louis Denempont, chose well. Their openings laid a strong and very profitable foundation. In turn those early stores went on to train personnel to manage the next seven hundred branches which were to open before the world went to war again. 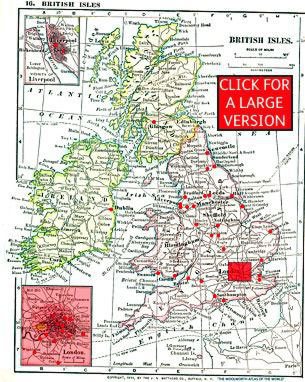 The forty-four British 'pioneer' stores opened before the Great War were revered by the Company for more than 70 years. They were hand-picked as flagships by the man whose name appeared above the door, Mr. F.W. Woolworth. After his death "Frank's stores" were given priority for investment and the Board went to great lengths to obtain the freeholds and to enlarge and enhance them. More superstores were to follow, most notably in London's Oxford Street, Birmingham's Bull Ring and Edinburgh's Prince's Street, as well as York, Oxford and Chester - each in a prime location, and each accumulating rapidly in value through the 20th Century. Little wonder perhaps that this kernel of real estate appealed to new owners in the 1980s, and that their sale went on to finance the development of sister company B&Q.

After opening six stores along the line of the Lancashire and Yorkshire Railway in 1909 and 1910, and tackling the London metropolitan area in 1911 and 1912, attention turned to achieving full geographic coverage across the British Isles. At Frank's insistence special teams were dedicated to taking Woolworth's to Scotland and Ireland, leading to openings in 1913 and 1914 in parallel with further expansion in England and Wales.

This page celebrates some of the pioneer branches which became the Company's heart.

Above: the Woolworths store in Castle Street Bristol, which opened in 1911. Note the complete lack of traffic in this busy thoroughfare. Castle Street was largely destroyed early in the Blitz. The City Centre was remodelled after the war. Woolworth re-opened in Broadmead.

Below: the first Irish Woolworths in Dublin's fashionable Grafton Street, which opened on 23 April 1914. Frank Woolworth was one of a number of executives at the New York headquarters who claimed Irish ancestry. They were particularly proud of this opening, along with another in High Street, Belfast in the industrialised north of the island, which opened on 6 November 1915.

Left: The Scottish store which opened in Argyle Street, Glasgow in 1913.

Unusually the fascia has the "NOTHING IN THESE STORES OVER 6D" in the centre. "WOOLWORTHS STORES" also appears in a semi-circle above the parapet wall.

The adaptations were agreed with the landlord, replacing signs from a previous occupant. 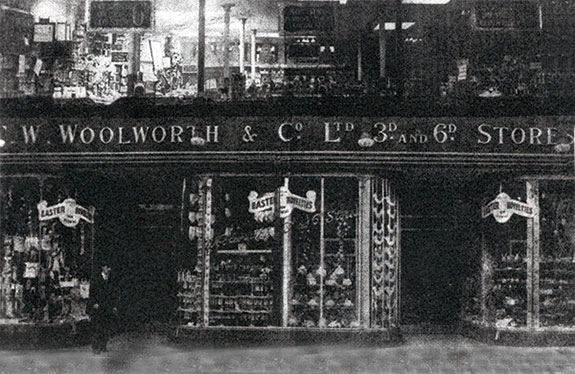 Right: Easter displays at the popular store in Hare Street, Woolwich, in April 1911.

The Store Manager, George Wales, pioneered the location, and went on to open further London branches in Rye Lane, Peckham in July 1912, and in King Street, Hammersmith in October 1914.

Wales was a patriot and enlisted for service after the outbreak of the Great War. At the end of the War he chose to remain in France, never returning to Woolworth's. 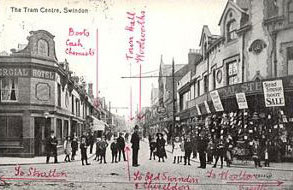 Right: the person who sent the postcard of the infamous 'Tram Pinch' Swindon (a view down Regent Street in the Wiltshire town), has kindly marked the location of Woolworth's along with Boots the Cash Chemists and the Town Hall.

The store was relocated before World War II and extended several times. It appears again in our 1930s, 1950s and 1990s exhibits. Swindon remained a company favourite, with a wide frontage in Regent Street and a further entrance in Edgeware Road, until the demise of the store-based company in January 2009. The town was home to the main national distribution centre for the chain in the Dorcan Industrial Estate, Faraday Road from 1973 until 2009.

By the outbreak of World War I there were forty-four branches of Woolworths right across the British Isles - known later to Managers as the 'Pioneer stores'. The outbreak of war left the company very short of Managers and Learners, but there was no shortage of builders or property. As a result, after a blip, the pace of openings slowed rather than stopped. By 1921 there were a hundred Woolworths stores, with plans for many more.