One of the ways in which Frank Woolworth was able to stay ahead of a growing number of competitors in the dimestore business was to share his buying expertise and innovation. He signed up a group of relatives and former co-workers to open five-and-ten chains of their own, without treading on each others' toes. Each of his associates drew on the Woolworth range, helping him to obtain volume discounts and establish what retailers today call a 'virtuous circle'.

a powerful engine for growth 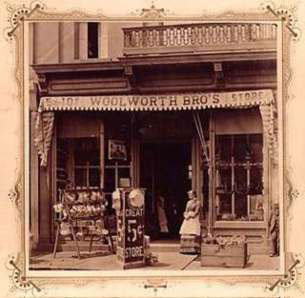 After a single day's trading in Lancaster, Pennsylvania, Frank Woolworth wrote to his father telling him of plans to expand. He persuaded his brother, Charles Sumner Woolworth ("Sum"), to join him as Manager of a small, satellite store in Harrisburg in neighbouring Dauphin County, which was home to the State Capitol. This branch opened just a month later on July 19, 1879. On the first day it took $85.41, and traded well for several weeks.

Sum was a good partner and a diligent worker but, try as he might, the location was far from ideal. Despite a sales revival in the run-up to Christmas the going was tough and the brothers were convinced that they could do better, particularly when the landlord demanded a higher rent. So over and above trading the stores for long hours, they travelled far and wide in search of other towns and premises. In March they closed Harrisburg, with Sum helping out in Lancaster for a short time. 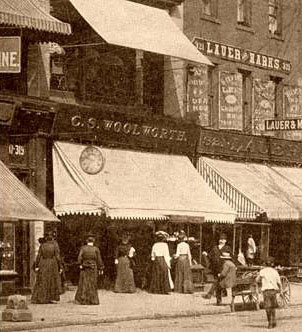 After another experiment in nearby York, managed by Sum for $8 a week, they took a shop on the east side of Lackawanna Avenue, in fashionable Scranton in Lackawanna County. It opened on November 6, 1880.

Results were good, allowing Sum to buy out his brother in two stages at the year end in 1880 and 1881. He made Scranton his home, and it remained his favourite store throughout a remarkable carrier spanning 68 years with the business. In later life he remembered that the premises seemed huge in comparison to the Lancaster or York stores. The rental was low so they decided to take the over-sized premises and build a false wall about two-thirds of the way back to split the floor into a sales area and a stockroom.

Although Sum bought some items for himself, most of the range came from Frank Woolworth, helping him to bring his idea of a Buying Syndicate to life.

Sales on opening day were just $43.20, but peaked at $235.07 on Christmas Eve. After a while trade levelled out, with the store taking good money. In the first full year it turned over in excess of $9,000. 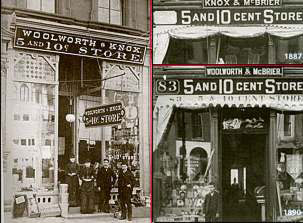 In 1881 Frank Woolworth went "on holiday" back to Watertown. He was greeted as a hero, boasting $4,000 profits so far. William Moore entertained Frank and his wife Jennie as old friends and fellow-merchants. Frank was on the look out for partners. With remarkable commercial acumen he had worked out that a chain of stores, spread far and wide would give him lots of buying power without the stores competing directly. He could also avoid debt if each store was run by a partner who put up stake money in exchange for a share of the profits. Hence the friendly rivals were born.

Before long he had signed up his cousins Seymour Knox and Edwin McBrier, and had explored the idea with Fred Kirby, Carson Peck, Clinton Case and Alice Coons - all his co-workers when he worked at Moores. 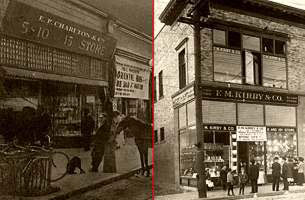 Kirby took the bait and opened his first store in Wilkes-Barre jointly with Sum Woolworth in 1884, just a fortnight before Seymour Knox opened a branch in Reading jointly with his cousin Frank. Knox later brought the astute travelling salesman Earle Perry Charlton into the Syndicate in 1889.

During the 1890s the Syndicate established a friendly alliance, in which the members shared ideas and pooled buying power as they sought to expand rapidly, without treading on each others' toes. Knox and Charlton opened stores in Canada on both sides of the Rocky Mountains. Meanwhile Kirby headed South, taking on Ohio, Virginia and Kentucky en-route for Louisiana. Occasionally they swapped and traded stores to accelerate their progress.

Five and ten stores became a phenomenon, with Woolworth Syndicate far outstripping their main competitors, McCrory, Kresge and N.M. Rothschild. Part of their secret was Frank Woolworth's buying, which was widely acknowledged to be second to none. But part of the secret was in the marketing, with the stores among the first to loss-lead to gain new business.

Each of the pioneers made a lot of money during this time. They ploughed the bulk of the profit into additional openings and, as confidence grew, into an improved store environment. Where once the gold lettering on the masthead was the only significant store asset, by the mid 1890s branches included elegante mahogany counters and full electric lighting to set them apart from competitors. 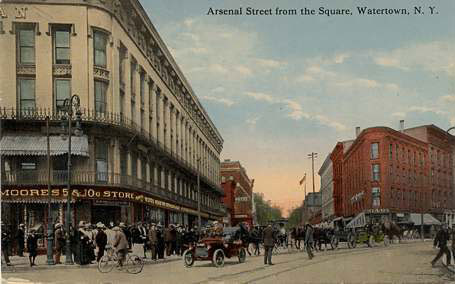 Frank showed great loyalty to his friends, but was ruthless with anyone who crossed him. When William Moore hit hard times, the one-time apprentice stepped in at once, bankrolling the conversion of the Watertown shop as the W.H. Moore 5 & 10¢ Store. But when his cousin Herbert G. Woolworth decided to go it alone outside the Syndicate and hit the rocks, Frank left him to fail and bought the stores in a fire sale.

Woolworth established himself as an enlightened employer. Although he drove his clerks hard for low pay, he rewarded loyalty with paid holidays, a Christmas bonus and a welfare fund for anyone needing medical treatment.

At the turn of the twentieth century there were a number of highly publicised hostile takeovers in American industry. Syndicate Members feared that their high returns and continued growth left them vulnerable. With the exception of Sum Woolworth, all responded by incorporating between 1905 and 1908. They became companies limited by guarantee, selling their share capital to family members, trusted employees and a few closed friends. Restrictions prevented the shares from being publicly traded. The capital raised was mainly ploughed into an aggressive opening and upgrade programme. 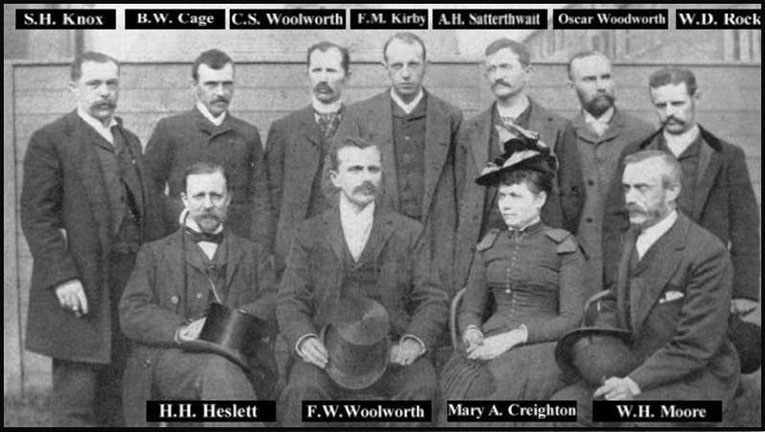