From time to time Woolworth buyers indulged in the age-old indulgence of blowing their own trumpet, selling products that featured the stores themselves.

These lines proved particularly popular with the staff and their families, and were often originally introduced in response to requests from the public.

Today they leave a surviving reference to the much-loved brand in toy boxes across the USA, Canada, Britain and Ireland, after the stores themselves have vanished from Main Street.

They are also highly collectable for lovers of heritage and memorabilia.

This page is dedicated to a few of the Toys sold at Woolworth that featured the stores themselves. Some were small indulgences, but most were suggested by third-parties and brought forward as product samples, which went on to win an all-store listing.

It is probably no surprise that the legendary pic'n'mix was immortalised in a series of Toys. The Junior's Sweet Shop was such a hit in the early Sixties that the Hong Kong-based supplier hurried out a second line, an F. W. Woolworth & Co. Ltd. supermarket to join it. The latter promised fifty ways of spending sixpence (2½p.) The contents of the tiny packets in each box were edible. The cardboard Oxo Cube box and Nescafé jar were crammed with Dolly Mixtures and Hundreds and Thousands. Almost fifty years after the Toys were made we weren't brave enough to taste the contents when we took the photos!

If you float your mouse over the picture below, the counters will fill themselves by magic, a trick that company bosses never quite managed to master, despite ninety-nine years in the High Street. Try as they might, they still had to pay the staff to fill up!

One of the most popular Toys from the twenty-one years of Chad Valley at Woolworths also drew inspiration from the pic'n'mix. The design was more reminiscent of the weigh-out sweets department of the 1950s, with old-fashioned weighing scales and a cash box. It also included edible sweets, drawn from the 'Bags of Fun' range. It featured milk gums, jelly babies, liquourice bootlaces and mini Kojak-style 'who loves ya' lollipops. 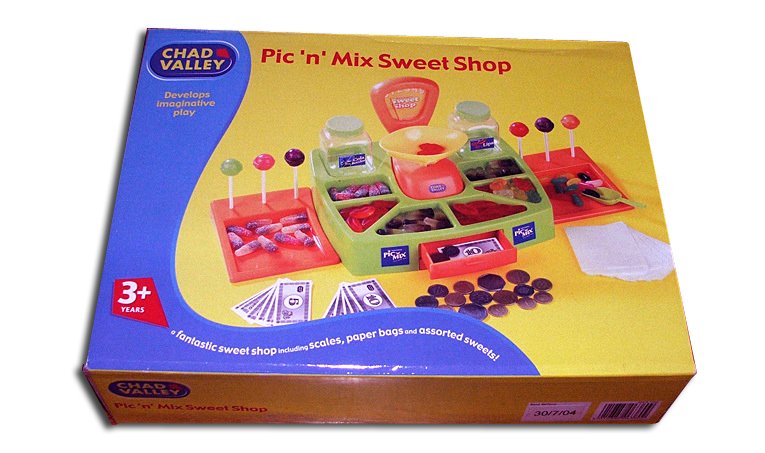 The most realistic representation of the Pic'n'Mix was created by Mattel as part of the Barbie range. The design was sold around the world, but only the version sold in the 820 High Street carried the Woolworths logo and 'Pic'n'Mix' branding, in place of the words 'Barbie's Candy Store'. The detail of the design very closely matched the fixtures that were used in the larger stores in the 21st Century. The Mattel version outlived the actual counters, which were replaced by Candy King when the Pic'n'Mix operation was outsourced in 2006. 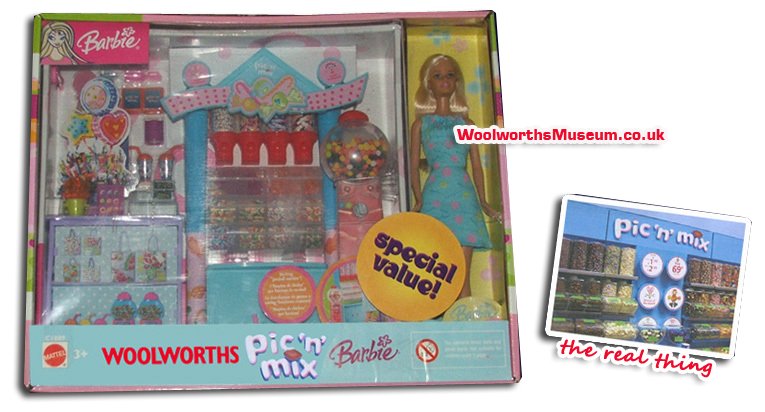 Other toymakers took their inspiration from the storefronts and landmark buildings. Miniature Woolies and Five-and-Ten stores became a regular feature both in Europe and North America, either as collectables or as part of town centre layouts which could be purchased a piece at a time. These were particularly popular for model railway layouts.

Our first exhibit shows (below: left to right): 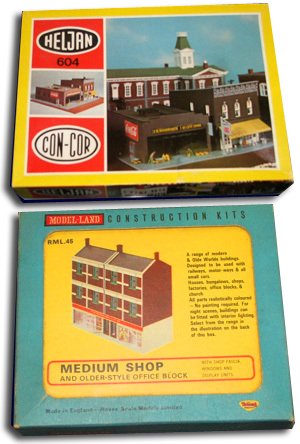 Our second selection below builds to a whole town centre of mini-Woolworths stores:

Railways featured again in 1979 when Woolworth sponsored wagons to thank America for its first hundred years in Main Street. The event was immortalised in an AFM HO gauge model, which featured the white wagon and carried the car number WWX 1979.

The best-selling collectable series had a royal theme. The Corgi and Dinky models of London Buses in the distinctive livery of H.M. Queen Elizabeth II's Silver Jubilee proved a smash hit with the public in 1977 at £4.49 each. The Silver Jubilee prompted a wave of patriotism and celebration across the UK, resulting in bumper sales. The larger model third from the left, a basic plastic version around a foot (30cm) long, was intended for outdoor play and was offered in seaside stores and the largest branches. The design surfaced again as part of the collectors' range in the 21st century, when Sunstar produced a high quality Sunstar 1:36 replica of the original bus, choosing to present their model in Woolworth livery. With a recommended retail price of £150 it was considered out of the price bracket of Woolworths customers and was not offered in the stores. To complete the picture in real style, the chain also sponsored the actual buses themselves, which carried the words 'Woolworth welcomes the world' all over London in 1977.

Finally in our whistlestop tour of Woolies by Woolies at Woolies, here are models of some of the vehicles that conveyed goods to the Main Street and High Street stores over 130 years of trading. The models sold in very large quantities, but comparatively few survive today. They give a snapshot of the Woolworth branding over a period of more than seventy years.

The first miniature Woolworth lorries were diecast and smaller than a matchbox, selling for five cents in the USA and threepence in Great Britain. They reflect the thrift and economy that the brand was famous for, but were still fun to play with. The tractor and trailers originally clicked apart.

By the 1950s the world had changed. With household incomes rising, parents spent much more on their children. Woolworth responded with much more substantial toys at prices twenty or even forty times the pre-war limit. The most popular lorry of the era was the Marx Sit'n'Ride model, which was around thirty inches (55cm) long and was made of diecast metal. It carried both of the firm's mottos ("your money's worth more at Woolworth's" and "satisfaction guaranteed or your money back"). It had a detachable tractor, while the trailer offer good detail like opening rear doors. Many children used the hollow trailer to store their other toys or as a secret hiding place.

The theme continued in the Seventies. Woolworth undertook a major rebranding, both in North America and the UK. The two designs were different but complementary, and soon appeared on products in-store. In the USA an 18cm (1 foot) light plastic and metal model proved popular in the new blue livery, despite some people lamenting the passing of the red used for over 100 years. 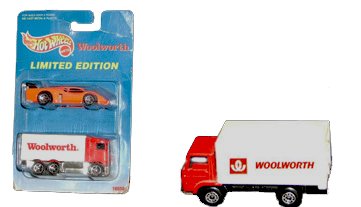 In the UK the Buyer was delighted when he was approached by Lesney, the maker of world-famous Matchbox toys, for permission to include a Woolworth lorry in its assortment pack. The 'rigid' style short wagon was duly selected. As ever the Matchbox was a great likeness, albeit missing the dirt that seemed particularly attracted to the white body of the real vehicles on the road.

A very similar wagon later appeared as an exclusive in Woolworth stores in the USA and Canada, as part of a Hot Wheels blister pack from Mattel in the 1990s. 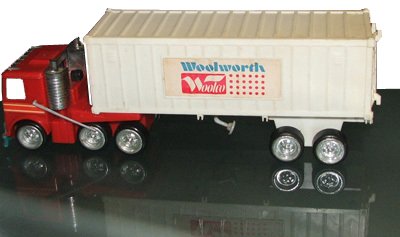 A drive to cut overheads in the 1980s was to have far-reaching implications. In North America the brand fell into decline after the closure of its out-of-town Woolcos in the USA. These monoliths had once been a beacon for the future, but had never paid their way, unlike the similar outlets in Canada. The sale of the British subsidiary partly financed the close-out of Woolco USA, and a revitalisation of the Canadian stores.

But, like many Eighties products sourced in Hong Kong, Canadian Woolco's lorry was cheap and lightweight. It was a far cry from the diecast Marx vehicles of Woolworth's heyday.

Meanwhile in the UK, despite a wave of store closures as part of an asset realignment within the Kingfisher Group, the brand enjoyed a period of revival. The new owners invested to enhance the store environment and substantially extended and improved the range of Toys. By the mid 1980s Woolworths had the leading market share, making one in every five toys sales in the British Isles. Leading toymaker Corgi included a Woolworths Lorry in its Superhaulers  range. Initially this featured the chain's new light blue livery with the slogan 'A great deal for the family'. It was updated in 1993 when a further rebranding restored the traditional red, with the 'Right up your street for value'.

In the mid 1990s a larger plastic Woolworths lorry became an unlikely Chad Valley hit, remaining in the range until 2002.

After Woolworths left Kingfisher Group in 2001, it began to rediscover its heitage. Many of the items shown became favoured gifts for long-service awards, earning pride of place in the homes of those who had completed 21 or 40 years' service, or who had retired after a long career. 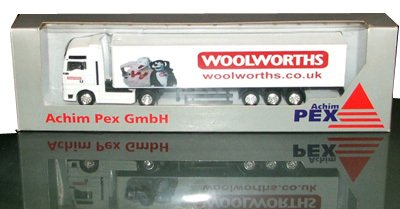 Our last exhibits were specially made for the Museum, at the request of long-servers in the business. They feature the final two liveries used on the lorries. Each was hand-finished using decals of the actual artwork deployed on the road to colour matched stock from the German toymaker Achim Pex GmbH.

When they were made, we had no idea that, just as it seemed Woolworths UK was on the road to recovery, the fleet of lorries would soon be standing idle as the stores they served closed their doors.